NOTE: What you are about to see below is called “revelation of the method” — the process by which the psychopathic “elite” tell us ahead of time what they plan to do.  They make these announcements ahead of time because, in their warped and twisted minds, they believe if they tell us what they are going to do and we do not object, then they have our consent.  Thus, they believe, they cannot be held spiritually accountable or liable for the harm they cause.

Behold the insanity of those who deviously plan over decades and centuries about the ways they intend to kill us.  This book was published in 1981.

READ HERE: Is The “Coronavirus” Actually Microwave Illness from 4G and 5G Radiation?

In the novel, the coronavirus is called the “perfect weapon” because it only affects humans. It also cannot survive outside the human body for more than a minute and does not require an expensive decontamination process once it spreads through a population and those who contract it.

The coincidence between the book’s virus and the actual coronavirus outbreak is uncanny. Currently, the coronavirus which originated in Wuhan, China is causing panic throughout the world. On Thursday, officials from the Centers for Disease Control and Prevention (CDC) confirmed that an American evacuee from Wuhan who is currently in Texas was diagnosed with the virus, making it the 15th case in the United States.

What are the chances, you may ask of a thriller author like Dean Koontz writing a book 39 years ago predicting a killer coronavirus? Before you answer, add to that question what are the chances of also correctly calling it as starting not just in China, but in the Chinese city of Wuhan, and in a lab? Because that is the exact scenario painted by Dean Koontz in his 1981 thriller ‘The Eyes Of Darkness” about a killer coronavirus in a lab in Wuhan, China. I kid you not. The complete audio book of that novel is included at the bottom for your consideration.

“In politics, nothing happens by accident. If it happens, you can bet it was planned that way.” Franklin D. Roosevelt

We all know that the statistical probability of an author calling all those 21st century actual events 4 decades before it happens is very low, and yet, here we are. Conspiracy theory exists because of “coincidences” just like this. Did Dean Koontz have inside knowledge of the possibility of these events? Before you answer, let me call your attention to a 2013 NTEB exclusive article where former CIA operative Jim Garrow revealed on our radio show that spy thriller novelist Tom Clancy was spoon fed inside information from the CIA and Pentagon, and then was killed to cover it all up. As FDR told us generations ago, there are no coincidences in politics, and the Wuhan coronavirus is nothing if not political. Well played, Dean Koontz, well played. 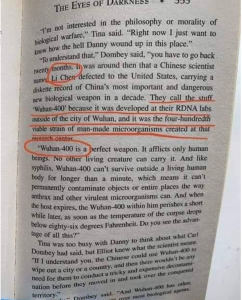 A Dean Koontz Book From 1981 Predicted Coronavirus In Bizarre Coincidence

FROM GER UNGUREAN: The fictional novel by author Dean Koontz tells the story of a Chinese military lab that creates a new virus to potentially use as a biological weapon during wartime. The lab is ironically located in Wuhan, China and the made-up virus is called Wuhan-400.

In the novel, the virus is called the “perfect weapon” because it only affects humans. It also cannot survive outside the human body for more than a minute and does not require an expensive decontamination process once it spreads through a population and those who contract it.

THE COINCIDENCE BETWEEN THE BOOK’S VIRUS AND THE ACTUAL CORONAVIRUS OUTBREAK IS UNCANNY. HOW DID DEAN KOONTZ KNOW?

Currently, the coronavirus which originated in Wuhan, China is causing panic throughout the world. On Thursday, officials from the Centers for Disease Control and Prevention (CDC) confirmed that an American evacuee from Wuhan who is currently in Texas was diagnosed with the virus, making it the 15th case in the United States.

CDC officials told Fox News that there will “likely be additional cases in the coming days and weeks, including among other people recently returned from Wuhan.” Though the first 195 evacuees were released on Tuesday, “more than 600 people who returned on chartered flights from Wuhan remain under federal quarantine and are being closely monitored to contain the spread of the virus,” officials added.

The case also marks the first in Texas. The 14 other cases have been reported across the country, the first of which occurred in a Washington state man who has since been released from the hospital. Other cases have been confirmed in California, Wisconsin, Arizona, Massachusetts and Illinois. No deaths have been reported in the U.S., and the large majority of cases still remain in China. Overall, more than 50,000 people have been sickened globally from the coronavirus while 1,370 have died. READ MORE

We were told by our Lord that many things would happen in these last days:

“And as he sat upon the mount of Olives, the disciples came unto him privately, saying, Tell us, when shall these things be? and what shall be the sign of thy coming, and of the end of the world?  And Jesus answered and said unto them, Take heed that no man deceive you. For many shall come in my name, saying, I am Christ; and shall deceive many. And ye shall hear of wars and rumours of wars: see that ye be not troubled: for all these things must come to pass, but the end is not yet.  For nation shall rise against nation, and kingdom against kingdom: and there shall be famines, and pestilences, and earthquakes, in divers places. All these are the beginning of sorrows.  Then shall they deliver you up to be afflicted, and shall kill you: and ye shall be hated of all nations for my name’s sake. And then shall many be offended, and shall betray one another, and shall hate one another. And many false prophets shall rise, and shall deceive many. And because iniquity shall abound, the love of many shall wax cold.  But he that shall endure unto the end, the same shall be saved. And this gospel of the kingdom shall be preached in all the world for a witness unto all nations; and then shall the end come”  Matthew 24:3-14 (KJB)

Keep your eyes on Jesus and continue to pray!

How Can I Be Saved?

‘The Eyes Of Darkness’ by Dean Koontz Audiobook 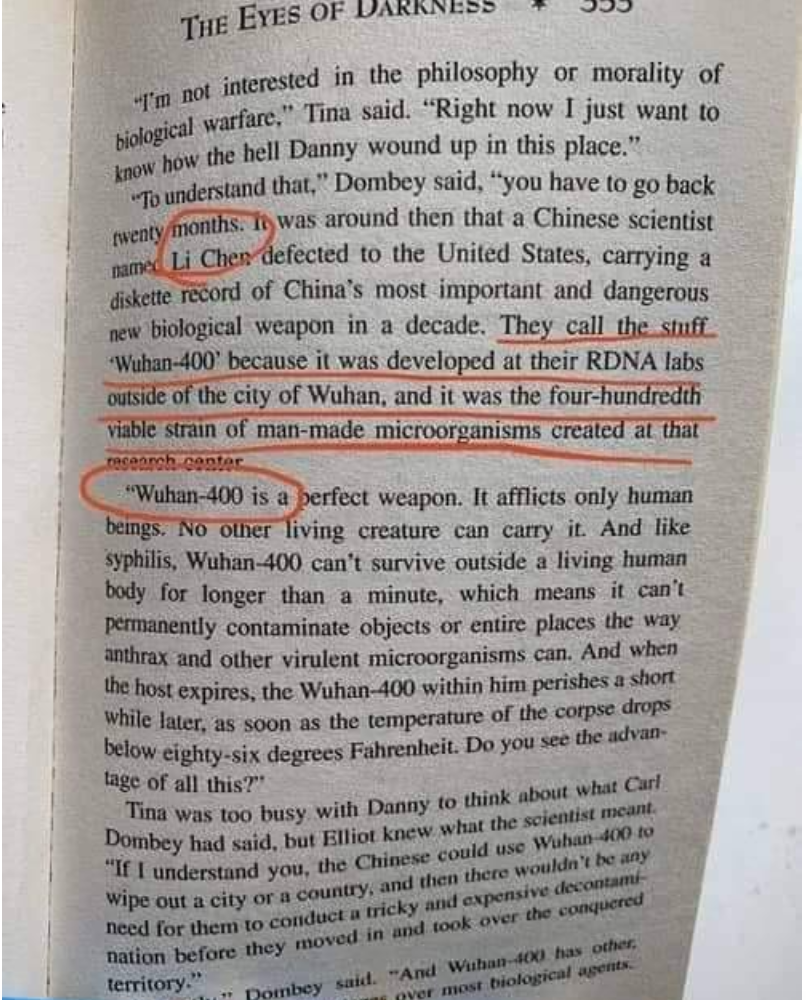 Koontz wrote this book using the name Leigh Nichols. He used many pseudonyms. His breakthrough book was pub’d in 1980 (Whispers), and Wiki says he used other names to write in different genres.

The following page of the book cited in the email below mentions “the Ebola virus in Africa,” also many years before the world heard of this virus. (see image attached)

In the 1960s, Koontz worked for the Appalachian Poverty Program, a federally funded initiative designed to help poor children.[7] In a 1996 interview with Reason Magazine, he said that while the program sounded “very noble and wonderful, . . . [i]n reality, it was a dumping ground for violent children.. . and most of the funding ended up ‘disappearing somewhere.'”[7] This experience greatly shaped Koontz’s political outlook. In his book, The Dean Koontz Companion, he recalled that he:

realized that most of these programs are not meant to help anyone, merely to control people and make them dependent. I was forced to reconsider everything I’d once believed. I developed a profound distrust of government regardless of the philosophy of the people in power. I remained a liberal on civil-rights issues, became a conservative on defense, and a semi-libertarian on all other matters.”[7]