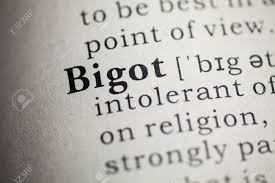 Political correctness will be the death of us all. We’re so afraid to say what we think for fear of being judged, that we stay silent rather than starting a storm. But I say, if our words are going to create a storm, let’s make it the best and biggest storm we possibly can. Let the winds blow and the rains wash away this shameful era of world history.

Those who support No Jab / No Pay / No Play are bigots – pure and simple.

Whether they are members of parliament, media representatives or your next door neighbours – if they believe it is OK to discriminate against you and your family or to treat you with anything less than the respect all citizens of a democratic nation should expect, they are bigots.

Definition: Bigot: a person who has strong, unreasonable ideas, esp. about race or religion, and who thinks anyone who does not have the same beliefs is wrong.

Our government – elected and funded by US – is comprised of bigots.

Many within mainstream medicine are bigots.

And members of the hate groups, Friends of Science in Medicine, Stop the AVN and the Australian Skeptics are all bigots.

Watch this powerful short video about a woman who has decided that she is not going to put up with vaccine bigotry any longer. Like Rosa Parks did over 60 years ago when she was arrested for not moving to the back of a bus due to the colour of her skin, Sheila Ealey has decided to ‘get off the bus’. She will hopefully be joined by a lot more of us, standing in solidarity against discrimination of any kind – racial, sexual, religious or medical.

“Get off the bus!” Sheila Lewis Ealey unites Compton! from Francesca Alesse on Vimeo.

Except that it has. And it has been government-approved.

When we see the leader of the Australian Greens party standing up in Parliament to thank people who have abused and threatened parents whose only ‘crime’ was wanting to care for their children as they feel is best – we know that vaccine bigotry has institutional support.

When we see someone who has made a name for themselves by publicly shaming or abusing those who think differently about vaccination, receiving government awards instead of jail sentences, we know that vaccine bigotry is systemic in our society.

And when we read media articles written by journalists who are functional illiterates yet feel that they have the right to tell the government how they should punish anyone who disagrees with them on scientific or medical health issues, we know that vaccine bigotry has pervaded the very fabric of Australian life today.

Let’s fight against this by first and foremost, calling these people what their words and their actions have defined them as – bigots. The language is powerful, so let’s use this weapon to defeat bigotry.

If we can be called anti-vaxxers for asking valid, scientific questions about medical procedures that are capable of killing or injuring us or our children (let’s not even think about the fact that vaccines don’t work as promised – or at all), then we can use a more appropriate name for those who are responsible for this sociopathic and discriminatory behaviour – BIGOTS.

Let’s wipe out bigotry in Australia today. By naming it. By shaming it. By not standing for it any longer.