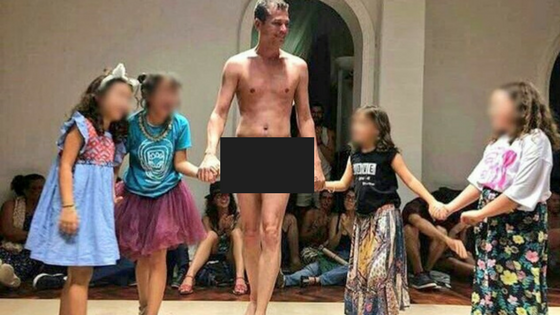 We were contacted recently by a concerned Brazilian mother who was outraged about an “art” exhibition that featured contact between young girls and nude men.

The images she sent us, of little girls touching and holding hands with a grown, fully nude man, are highly disturbing, but the artist and the museum who hosted him simply brush the whole incident off as “art.”

Sure enough, English-language sites have now picked up the story that MAM, an art museum in Sao Paulo, was host to the exhibit that featured a naked man laying on the floor, inviting onlookers to “interact” by moving his body around in different positions. The exhibition was also reportedly on display at the Goethe Institute in Bahia.

One video, of a four-year-old girl being encouraged to approach the man, laying on his back, and move his leg, has been circulating on social media. You can see the girl being high-fived by an adult onlooker after she crawls back to her seat in the crowd. (Note: we are not including any of the videos here because they contain full-frontal male nudity, but you can watch them on YouTube).

“The performance was in a closed session for guests. The little girl was with her mother who is also an artist,” the museum said of the incident, according to the Daily Mail. “Her daughter asked to enter the show after being given an explanation as to what it contained.”

“The child wanted to participate and under her mother’s guidance and supervision, she is seen on all fours going around the artist’s naked body without showing any embarrassment or aversion,” they continued.

These are lies, really. If you watch the video (viewer discretion advised), you can see the girl feels weird and nervous. She is four years old. It is the responsibility of the adults in her life to protect her!

This is nothing short of vile. It is indecent exposure and pandering obscenities to minors. Many Brazilians feel the same way.

According to the Daily Mail, several groups are calling for the artist and the museum to be prosecuted, saying that the exhibition “incites pedophilia”, and is nothing short of “eroticism,” “pornography,” “disgusting,” “unacceptable” and puts the “child at risk”.

They are not wrong!

This is apparently a trend in both Brazil and around the globe.

The concerned mother who brought this story to our attention wrote to Elizabeth how much she has noticed it all around her:

Last year, I perceived that something very weird was happening in my country, involving liberals and LGBT agenda, and the target was the children. That perspective terrified me.

As a Brazilian mom, with a 15-year-old kid and very concerned about his future and the future of other kids and teenagers, I started to look for answers to this question: why LGBT/ liberals/ globalists are trying so hard to pervert the childhood, emasculating boys and empowering girls?

So, looked in philosophy, anthropology, psychology, psychiatry, and history and discovered many things tied do Critical Theory, developed at Frankfurt’s School.

After that, I started to research Facebook pages abroad to see if those horrible things with kids was happening too. I was very shocked to confirm that yes, the evil spread out everywhere.

This is a global problem, and one that is nothing short of a demonic scheme to emasculate men, eliminate childhood, and destroy the family unit and with it, all virtue and morals. We are plunging into frightening times, but more than ever, we need to be the light of the world and reveal these evil happenings before it is too late!