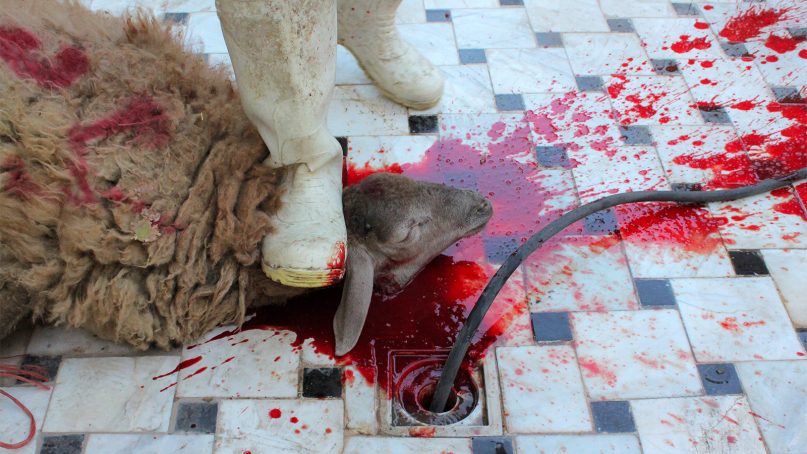 The Ethnic European REAL HISTORY survives on book royalties donated by author Michael Walsh and supporters of real history. OUR AIMS: To replace victor’s spin with real history, to enlighten, inspire and to educate, with your help to share our features as widely as possible.

The National Secular Society has warned the government against turning the UK into “a hotbed of non-stun halal slaughter” after it emerged that a large proportion of non-stun sheep meat is exported.

Figures from Food Standards Agency (FSA) 2018 slaughterhouse survey reveal that in 2018, over 94 million cattle, sheep and poultry were slaughtered without being stunned first in England and Wales. Every day 1,500,000 animals are killed in the UK whilst fully conscious, terrified and helpless.

Nearly a quarter (24%) of sheep meat that was not stunned before slaughter was exported from the UK. According to the British Veterinary Association, this equates to around 750,000 sheep being slaughtered without prior stunning per year for consumption outside the UK.

Animal welfare legislation requires all animals to be stunned before slaughter in order to minimise suffering. The only exemption is for religious communities to meet Jewish and Muslim religious requirements. The shechita (Jewish) method of slaughter is exclusively non-stun while halal slaughter is comprised of both stun and non-stun methods of slaughter.

WHY BENEFIT from the unpaid work of our editorial staff. Sadly, monthly donations are a fraction of a bartender’s tips. Please click SUPPORT US and donate.

The cruellest nation on earth, the latest FSA figures reveal that the majority of sheep slaughtered in England and Wales (71%) are slaughtered by a halal method (both stun and non- stun). According to the Office for National Statistics, around 5% of the UK population is Muslim.

The animal ritualistic killing comes first in the UK: The government has said it would “prefer all animals to be pre-stunned before slaughter on welfare grounds, but it observes the rights of religious communities”.

In August last year, the NSS criticised a £25m export agreement to supply 50,000 lambs killed without stunning to Saudi Arabia, warning it would “normalise the mistreatment of animals”. But, the government has since announced a further £6m deal to sell sheep meat to India.

Stephen Evans, the NSS’s chief executive, said: “All animals must be stunned before slaughter, without exception. For as long as a derogation exists, the export of animals that have been slaughtered without stunning should be prohibited.

“The fact that the religious exemption compromises animal welfare in the UK is unacceptable in itself. It is further concerning that the exemption is being abused to boost the UK’s halal non-stun slaughter industry. This certainly goes against the spirit of the exemption, if not the letter of it. Becoming a hotbed of non-stun slaughter would not be a good look for post-Brexit Britain.”

Earlier this week NSS honorary associate Kerry McCarthy MP asked a minister what effect the UK’s recent agreement with Saudi Arabia would have on the number of animals slaughtered without prior stunning. David Rutley, from the Department for the Environment, Food and Rural Affairs, gave an evasive answer.

In response to the figures, the British Veterinary Association and Compassion in World Farming have also called on the government to stop exporting non-stun meat while the religious exemption to the animal welfare laws exists. Both bodies also said ending non-stun slaughter entirely would be preferable. Earlier this month the BVA and animal welfare group the RSPCA published an open letter to the government calling for the end of non-stun slaughter.

A number of other European states, including Holland and Germany, have explicitly prohibited the export of animals that were killed without stunning. Slaughter without pre-stunning is banned in Austria, Belgium, Denmark, Estonia, Finland, Greece, Iceland, Latvia, Liechtenstein, New Zealand, Norway, Slovakia, Slovenia, Sweden and Switzerland.

Michael Walsh was awarded ‘Writer of the Year 2011’. With 60 books bearing his name, thousands of new stories and columns, Michael is arguably Britain and Europe’s most prolific author of multi-topic books none of which have been ghost-written.

MICHAEL WALSH is a journalist, broadcaster and the author of RISE OF THE SUN WEEL, EUROPE ARISE, TROTSKY’S WHITE NEGROES, MEGACAUST, THE ALLIED INVASION.  DEATH OF A CITY, WITNESS TO HISTORY, THE BUSINESS BOOSTER and THE FIFTH COLUMN VOLUME I and II, and other book titles.