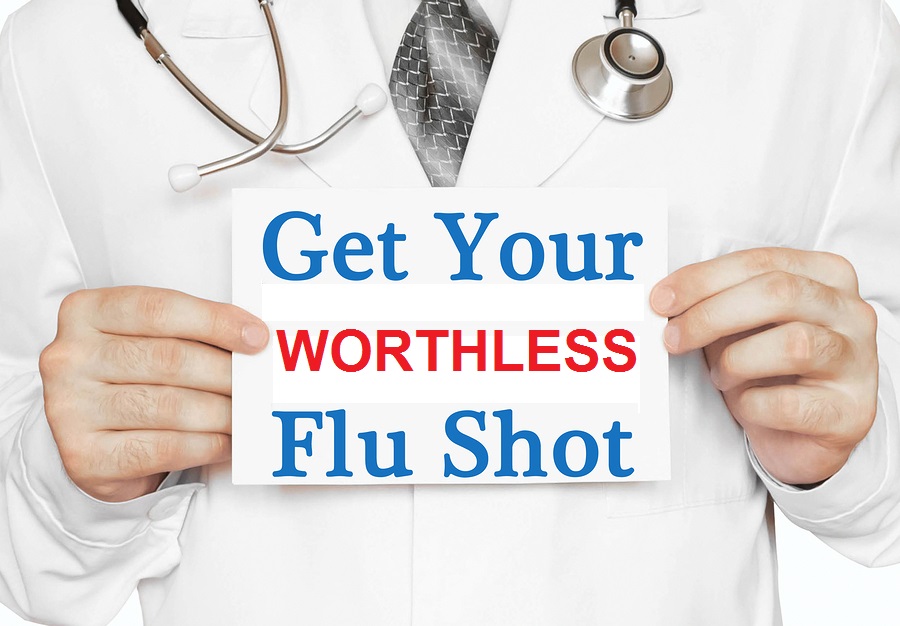 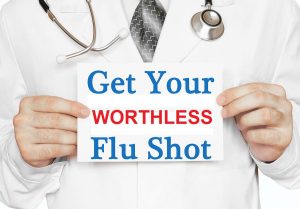 Sometimes topics for opinion pieces just fall out of the sky. Last week, officials at the Centers for Disease Control and Prevention (CDC) announced that the new estimate for the effectiveness of the influenza vaccine during the second half of the 2018-2019 “flu season” was only nine percent. That’s pretty bad even by influenza vaccine standards, which are notoriously poor.1 2

The 29 percent figure was reached by taking the average of the influenza vaccine’s effectiveness rate during the first half of the 2018-2019 season (about 47 percent) and combining it with its effectiveness rate for the second half of the season (about nine percent) — which actually comes out to 28 percent, so I assume they just rounded it off to 29.

Now, bear in mind that nine percent for the second half of the season is, according to the Associated Press and ABC News “virtually worthless.”1 2 But that isn’t the inspiration for this opinion article. No, it was the following line by both the AP and ABC News:

The flu shot was working well early in the season with effectiveness at 47 percent in February.1 2

So, this is what the blue smoke and mirrors approach to influenza vaccine policy has come to in the U.S.: An influenza vaccine that is estimated to be less than 50 percent effective is now viewed by the media and, supposedly, public health officials and doctors in the United States as “working well.”

When is the last time a job well done earned a score of 47 percent? Would an NFL receiver who caught less than 50 percent of the passes thrown to him be congratulated for playing a good game? Would a car with brakes that failed more than half the time be kept on the market?

A vaccine that is consistently estimated to be less than 50 percent effective by the CDC is being aggressively marketed and pushed each year in America on pregnant women, babies as young six months old, children, teens, adults and the elderly.4 5 6 7 8

Laws have been passed in some states requiring infants and children attending daycare to get an annual flu shot.9 Moreover, Americans are, increasingly, being pressured or coerced into getting this vaccine that fails more than 50 percent of the time. The federal government has recommended that flu shots should be mandated for all health care workers.10

Hospital workers, teachers and daycare workers, for example are being told they must get the flu shot every year or else face the possibility of losing their jobs, and people have already been fired for refusing to do so.11 12 13 14 15 16 17 18

In 2010, Barbara Loe Fisher of the National Vaccine Information Center (NVIC) saw this trend coming. She cited the case of doctors at Children’s Hospital of Philadelphia ordering all employees at the hospital to submit to getting the flu shot each year or face the consequence of being sent home for two weeks without pay to ‘think about it.’ She said, “Anyone, who still refuses to get a flu shot after that, is fired.”19

It is not a pretty sight to watch doctors acting more like thugs than healers. When doctors threaten people with financial ruin for refusing to shut up and salute smartly, there is something wrong.19

She added: “Trust is replaced with fear and anger. People start asking questions. Questions like: Who will be threatened and punished next for refusing a flu shot?”

Indeed. Who will be next? Imagine being given an ultimatum at your place of work: Get the worthless flu shot or you’re fired.

All this for a vaccine that, by the CDC’s own measure, fails to work more than half the time and, sometimes, is even less than 10 percent effective? And this does not take into consideration the downside of the influenza vaccine, which Fisher noted can cause, “nasty, unexpected side effects for some people, like paralysis and convulsions.”19 20

It is no small thing that injury claims for the influenza vaccine are the leading claim filed with the federal Vaccine Injury Compensation Program (VICP), with the polio-like Guillain-Barré Syndrome (GBS) topping the list of alleged injuries.20

Oh, and it’s worth keeping in mind that the CDC’s very low effectiveness rates for the influenza vaccine might even be lower than that, depending on the circumstances. A Canadian study published in the journal Eurosurveillance in 2015 found that the flu vaccine’s effectiveness decreased when a person got the shot two years in a row.20 21 22