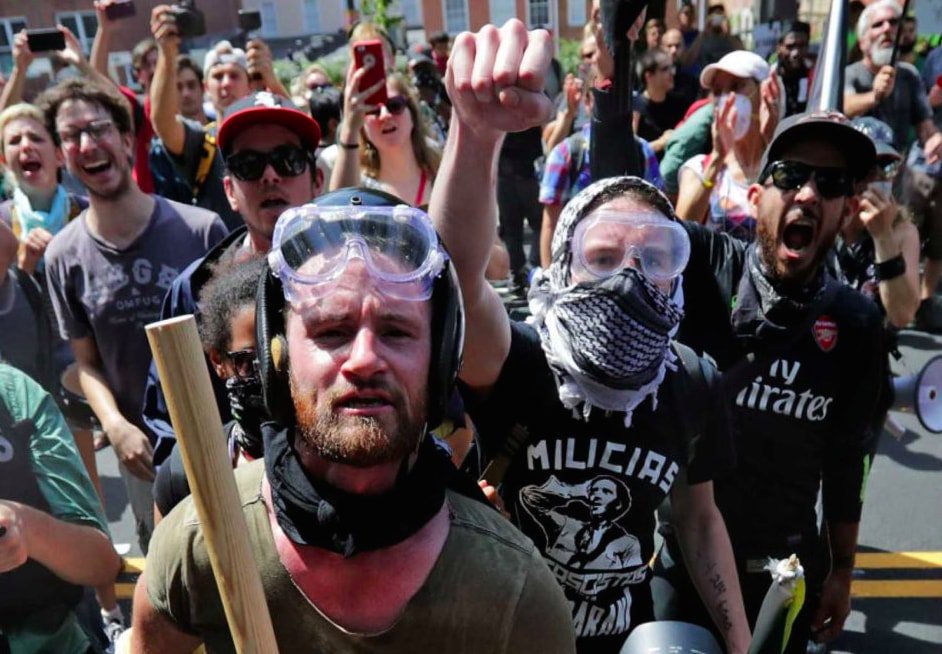 And the solution that almost no one appears to want—why are people allergic to solutions that work?

My tech partner and producer, Theo Wesson, has made several notes on the latest episode of black-white conflict in America, Charlottesville:

“Classic two-pronged Maoist tactic…. (a) shock troops on the ground causing violence and then (b) a sophisticated and coordinated…propaganda push by the parallel rogue state complex of Media, Academia, Hollywood and sold-out politicians. Historically huge. The Police standing down as the [third] element.”

“The violence puts the [television news] viewer in an altered state to receive the propaganda.”

Black vs. white. Nazis vs. liberals. Antifa vs. Alt-Right. Cut the dividing line any way you want to, factor in covert funding by people like George Soros, and you have a formula for escalating conflict between various sectors of society. Thus, driving more chaos.

Present the “sides” in the conflict as somehow representing the entire population of America. That’s the key.

This op is as old as the hills.

As for solutions, let’s start with a revelation about government funding for inner-city programs in St, Petersburg, Florida. The Tampa Bay Times reports:

“…the Tampa Bay Times set out to assess the region’s progress since the turn of the century, analyzing two decades worth of data on income, housing, demographics and crime.”

“Though the city has helped steer hundreds of millions of dollars into the neighborhoods around Midtown since 1999, they remain stuck in poverty.”

“Adjusted for inflation, the average household’s income has gone down.”

“Property values in the neighborhoods have dropped. Only 43 percent of homes in Midtown and Childs Park are owner-occupied, a rate that’s steadily declined since it was 60 percent in 2002.”

“Today, almost half of the region’s renters spend the majority of their income keeping a roof over their heads — nearly twice as many as in 1999.”

“In 2002, the crime rate was four times higher in Midtown and Childs Park [inner-city neighborhoods] than in the rest of the city. In 2014, it was more than five times higher.”

And then, the capper: “From 1999 to 2015, St. Petersburg helped steer over $210 million in private and public investments toward trying to improve life in the Midtown area, city documents show.”

You really have to design failure in order to make $210 million worthless.

Realize, first of all, that people tend to reject solutions if they haven’t heard about them before.

One solution here would be a program I’ve written about before, and it could be enacted for a tiny fraction of the $210 million that has gone down the drain:

Across the country, many such operations are underway. They’re happening. Local people are growing and eating their own food. Some of this food is also sold for profit.

—There should be many, many urban farms in the St. Petersburg inner city. Plots of land where local residents grow and trade and eat their own fresh, clean, nutritious food. It is a revolutionary act.

Initiate 50 of these farms. The government provides initial funding. The residents themselves will expand their operations into profit-making ventures; they’ll sell the excess food.

I’m estimating that for less than $5 million, the whole program can be launched—as opposed to the hundreds of millions of dollars that have been poured down unaccountable “investment” rat holes.

The residents of inner-city St, Petersburg would have a real economic stake in their own survival and success, and they’d escalate the power of their demands for safe neighborhoods—safe from gangs and thugs and drugs.

Improved level of health and strength.

If a certain president in the White House put this urban farm project into effect—not only in St. Petersburg, but in other inner cities across America—and if resistance developed, that president would have a powerful means of exposing the disruptive resistance as a conscious campaign to keep making these neighborhoods fail, IN ORDER TO PERPETUATE AN EXCUSE FOR RACIAL CONFLICT.

A clue: professional paid disruptors, and their duped allies, are hired to expand failure in inner cities and exclude workable solutions that benefit one and all.

Bottom line: there are always solutions that lift people up. Sidelining and canceling and distorting and misdirecting and betraying those solutions is the full-time job of operatives who have a hidden agenda. These operatives want failure. They want to use failure to blame some group(s) for the chronic problem—thus expanding unrest and anger and division.

THEREFORE, MANY, MANY CITIZENS (HYPNOTIZED VIEWERS) WILL NEVER BE “TUNED” TO SOLUTIONS.

LARGE WORKABLE SOLUTIONS WILL ALWAYS SEEM AND FEEL “STRANGE” AND OUT OF PLACE.

One estimate has it that, since President Lyndon Johnson declared a national War on Poverty in 1966, some two trillion dollars have been poured into inner cities of America, with a result that looks quite like the impoverished neighborhoods of St. Petersburg, Florida.

No one has the accounting books. No one has kept track. No one in the federal government has been able to stop the insanity.

Again, innovative solutions are not the aim of big and bigger government.

That aim appears to be: losing.

2 thoughts on “Charlottesville: black and white conflict in America”