Australian children as young as 12 years are now being targeted with untested, experimental and potentially lethal COVID-19 jabs.

The Therapeutic Goods Administration (TGA) is expected to announce on Friday it has approved the experimental Pfizer vaccine for use in children as young as 12.

It is now up to the Australian Technical Advisory Group on Immunisation to give total approval with this particular group being directly related to Big Pharmaceutical Corporations so it’s a win win for all of these disgusting criminals.

Unable to control his excitement at the prospect of poisoning and killing Australian children, Health Minister Greg Hunt made some comments about the approval of Pfizer jabs for kids that defy belief.

Children with serious underlying health conditions are expected to immediately be bumped to the front of the queue. SAY WHAT???

Describing the decision as “good news,” Health Minister Greg Hunt told Sunrise: “the early advice I have is they (ATAGI) will fast-track vaccines for 12-15 year old’s who are immunocompromised or have underlying medical conditions.” 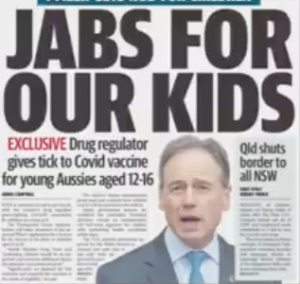 The Australian people need to wake up and understand that the Government are not here to protect you, they are here to KILL YOU!!!.

This is Gross medical misconduct with the threat of causing physical violence and death against vulnerable Australian kids and Greg Hunt, in particular needs to be held directly accountable for any damage or deaths caused.

The Australian people are now being kept in a vicious circle of never ending lock downs because an out of control and criminal Government serving the needs of Pharmaceutical corporations are desperate to lift low COVID jab rates at any cost.

Freedom of Information Request Reveals 5,522 People have Died Within 28 Days of Receiving COVID-19 Vaccines in Scotland

We are now being told to get a jab in your arm or stay in lock down while millions of people are out of work and billions of dollars wiped form the Australian economy. 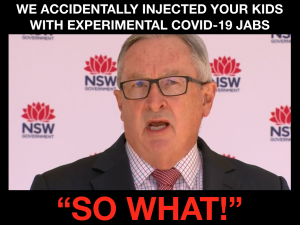