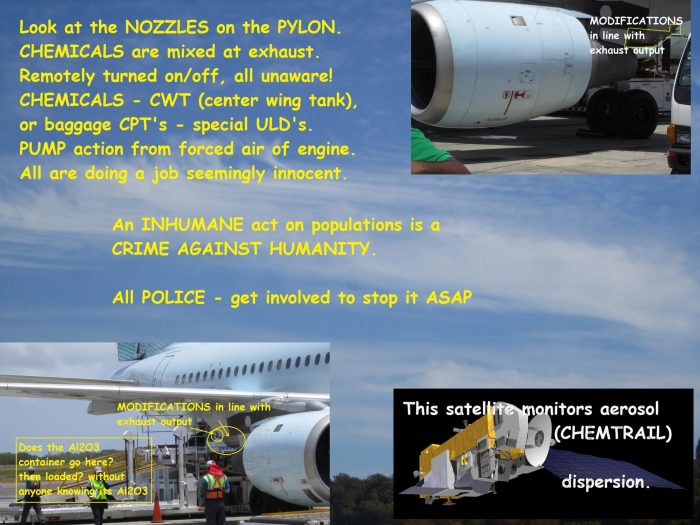 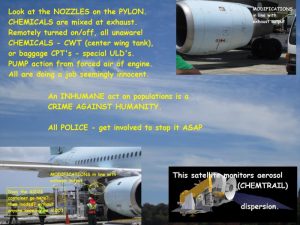 We are told by all “official sources” that the sun blocking weather disrupting jet dispersed trails we see in our skies are only “condensation trails“.

The “condensation trail” official narrative is perhaps the greatest lie the power structure has ever perpetrated to pacify the masses into ignoring the immense threat posed by climate engineering operations occurring over our heads on a daily basis.

Without knowing any of the related science facts on this issue, anyone with a sense of reason should be able to determine the fact that our skies are being sprayed. Trails that are turned on and off, grid patterns one day and nothing the next (in spite of often identical atmospheric conditions).

Witnessing one jet leaving a trail from horizon to horizon adjacent to another jet at a similar altitude that leaves virtually nothing. Trails of completely dissimilar compositions and colors.

There are misaligned plumes behind some jets (usually lower flying military tankers) that do not match the alignment of the engines themselves.

This causes some of the sprayed dispursion trails to shoot out slightly to one side of the aircraft (not parallel due to misaligned nozzles). There is also of course the fact that all climate science circles and governments around the globe are clamoring for climate engineering to be deployed (though none in these communities will yet admit to the truth, geoengineering was fully deployed decades ago).

Our society has been well trained to accept the official narrative on countless issues which is how those in power hide their crimes in plain site.

The fact that official explanations for what we see in our skies are completely contrary to deductive reasoning and the laws of physics has, so far, seemed not to matter to the majority of the population.