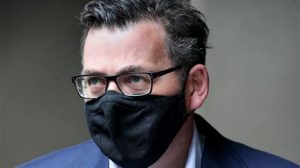 Victorians have lashed out at the Premier Daniel Andrews after he announced today Melbourne would see no easing of restrictions despite reaching its virus target.

Victorians took to Twitter to call the Premier’s decision to withhold the announcements a “huge kick in the guts” and “beyond a joke”.

Metropolitan Melbourne had been hopeful of further easing of restrictions on hospitality and retail, after the city’s rolling 14-day average number of virus cases fell to below five today.

But today the Premier dashed those hopes of easing restrictions, saying the government would delay any announcements, pending more test results related to an outbreak in the northern suburbs.

He said further rollbacks will not be announced until Tuesday at the earliest.

“No changes to metro restrictions. This is a huge kick in the guts after constant talk of significant announcements on Sunday. This bloody never-ending year,” 10 News reporter Emma O’Sullivan said on Twitter.

“This is beyond a joke,” 7 News journalist Joel Crean wrote on Twitter.

“On Sunday we were told 2 Nov. Wednesday we were told that would be brought forward, announced Sunday. Today the carrot is dangled again. WE ARE DONE @DanielAndrewsMP … ENOUGH!”