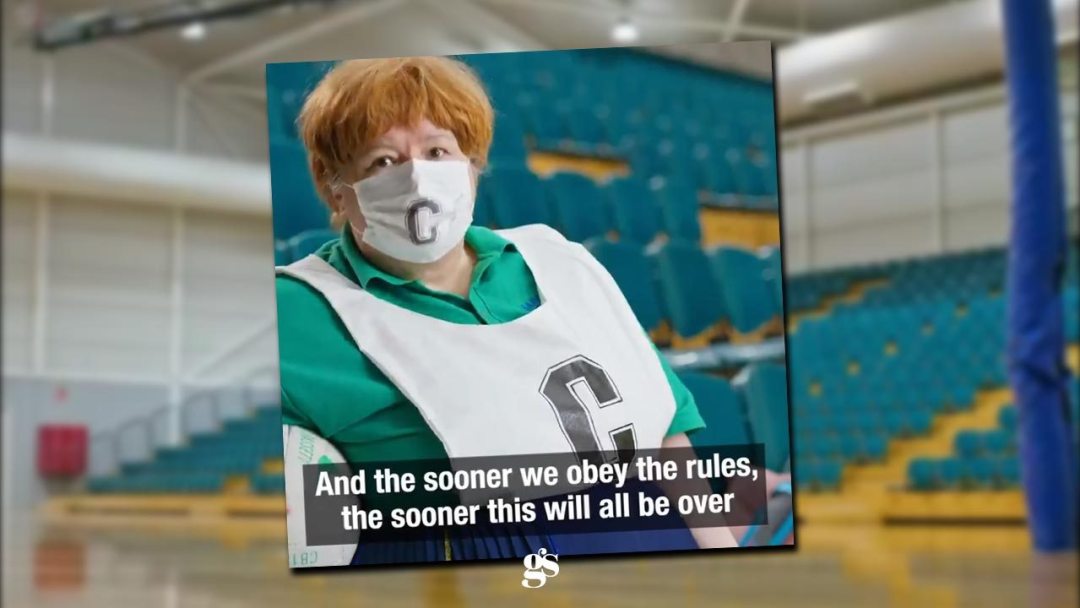 READ MORE AT THE GOODSAUCE

NOT CONTENT with locking citizens in their homes and destroying their livelihoods, the Victorian Government has now employed television’s most dim-witted character to lecture them about their behaviour.

An advertising campaign launched at the weekend features comedian Magda Szubanski as the moronic “Sharon”, from Kath and Kim, telling Victorians:

“The sooner we obey the rules the sooner this will all be over.”

The ad, which is about as funny as being fined by police for visiting your mum on Mother’s Day, shows Sharon playing a game of netball against herself.

“I tell you what, I am so over this lock down,” she huffs.

“Playing netball against yourself is not all it’s cracked up to be, especially when you still can’t even win.”

This, of course, is hilarious.

Obviously the Andrews Government expects voters – having momentarily forgotten that they are banned from travelling more than 5km from home, or from being out after dark – to be rolling around on their sanitised floors, laughing uncontrollably through their face masks.

But then comes the serious part.

The moronic Sharon looks down the camera and tells Victorians in a serious voice:

“But you know what, it’s not the lock down that’s the enemy, it’s the virus and the sooner we obey the rules the sooner this will all be over and we can get back to the stuff that really matters ……”

Now, of course, we all think she’s going to say something like “employment” or “visiting family” or “getting back to church”.

But instead Sharon says “netty”, which is side-splittingly funny because we all thought she was going to say something that really mattered.

And on top of that, “netty” is such an amusing word for netball. So the gag works on more levels than a hotel quarantine security guard.

She finishes the video by ‘subbing herself’ back into the game, claiming she is the most valuable member of the team.

Victoria’s Chief Health Officer, Professor Brett Sutton, took time out from the pandemic to tweet about the advertisement: “Nice work Shaz. From Bretty (Bretty Bretty)” which is just too funny because Bretty is, of course, one of the other Kath and Kim characters.

The Victoria Police twitter account sent out a message: “You’ll always be the MVP to us, Sharon”, by which we presume they meant Most Valuable Propagandist.

I haven’t checked the Stage 4 restrictions small print, but with the way things are in Victoria right now, it’s quite possible that police are going door-to-door to make sure people are laughing.

And why wouldn’t they laugh? What could be funnier than your government filming someone doing an activity they have banned you from doing, and then charging you for it!

The commercial drew sharp criticism both of the Victorian Premier and of comedian Magda Szubanski.

What seems lost on Szubanski, and certainly on the Victorian Government, is that it’s galling to be told “the sooner you obey the rules the sooner you’ll be allowed out of home detention” by a government whose own bungling has spread the virus.

And even worse, when the “tut-tut” message is delivered by the stupidest character on Australian television. It implies the long-suffering public, whom Premier Andrews has repeatedly blamed for spreading the virus, are even stupider.

It is patronising and it is misguided.

Fight fake news! The Good Sauce is bringing balance to the corporate media echo chamber. We are the first conservative source of videos and podcasts by so many independent voices from Australia. Our articles transparently distinguish between opinions and briefings: honest news without “progressive” agendas or euphemisms. Would you like to help us grow and produce more conservative new media? Become a Good Sauce supporter today and also enjoy extended interviews & bonus content.

James Macpherson is a sought after international speaker with a background in journalism at the Courier Mail and Daily Telegraph. He previously pastored a significant church in Australia and South Africa. James’ weekly Good Sauce podcast comes out every Tuesday. He also writes regularly for The Spectator.