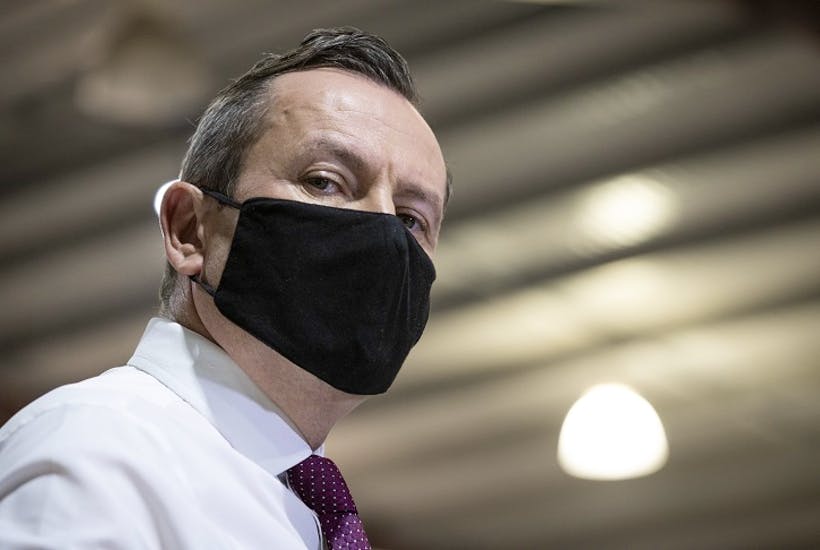 “NOTE” Coronaviruses and SARS-CoV-2 are a total hoax but i do like this article because McGowan is a psychopathic asshole and a manipulative conman.

Throughout the era of Covid, we have made numerous comparisons of governments and the restrictions they impose to past regimes built on totalitarianism, authoritarianism, or even fascism. Our so-called ‘leaders’ have been referred to on many an occasion as dictators, and rightly so; their actions have justified the dirty title.

The premiers, in particular, have not fallen short of the moniker, living up to it in every conceivable way they can. Whether it be threatening people’s jobs and livelihoods or stripping them of their rights and freedoms – closing borders on a whim preventing people from visiting family members on their deathbeds, or fining people for refusing to comply with their inane orders and castigating dissidents… They have not been afraid to take on more power and abuse it to their own advantage.

It follows then that there has been much debate over which premier is the worst.

Each one has their own flaws. Queensland Premier Annastacia Palaszczuk has been playing games with her borders repeatedly, especially the one Queensland shares with New South Wales. She has imposed vaccine mandates, forcing people out of work and out of society. The Northern Territory’s Michael Gunner (technically the Chief Minister) also imposed mandates on the workforce, and went as far as targeting unvaccinated citizens with a lockdown whereby they were not permitted to leave their homes for exercise. Both these states have built quarantine camps, with the Norther Territory escorting those who have been close contacts to the facilities.

One of the most obvious contenders is Victorian Premier Daniel Andrews. His penchant for extensive lockdowns lasting months on end (there is a reason Victoria has become known as ‘the lockdown state’) and allowing Victoria Police to act with force against those who do not adhere to the arbitrary rules, makes him an odds-on favourite for worst of the worst. It should be obvious given ‘Dictator Dan’ has been trending on Twitter every other week for the best part of the last two years.

If you had asked me this time last year who I thought the most insane despot in Australia was, I am almost certain I would have said ‘Dictator Dan.’ I am sure many others would have agreed. But I no longer believe this to be true. Another Premier has taken the disgraced title for himself.

That man is none other than Mad Mark McGowan.

The Western Australian Premier is in a land of his own. Not only has he imposed several lockdowns, vaccine (and now booster) mandates, he has kept the border closed constantly. Even with the vast majority of Australians fully vaccinated, McGowan is refusing to allow interstate travellers from anywhere else in the country entry into the state.

And just when Australians thought the border might be coming down, McGowan has – to absolutely no one’s surprise – changed his mind. In the dying hours of last Thursday night, the mad tyrant held a press conference to announce that the plan to re-open the border on February 5 had been scrapped, and the re-opening postponed indefinitely. That word bears repeating in these circumstances – indefinitely.

People have not been able to travel to the state to see their families. Small businesses have suffered from a lack of tourism – an industry that has been greatly impeded by the border closures. The Labor government has had two years to prepare, but instead of doing anything productive, Mark McGowan spent his time hurling jibes at New South Wales.

To put things in perspective, Australians can travel overseas but they cannot travel to a state in their own country. An Australian traveller could fly 21 hours to Miami, Florida but not five hours (or less, depending on where in the country you are) to Perth. That is how absurd it is.

While many Australians can see just how inane this all is (and are rightly furious about it), there are still some among us who think it is a good thing that McGowan is keeping the state segregated from the rest of the nation. They have become deluded to the point that they think permanent isolation is necessary to keep them safe. If Western Australia cannot bring itself to live with the virus, they are going to be in seclusion, fearing a virus with an immensely high recovery rate for the rest of their lives. That is no way to live.

At this point, Western Australia may as well begin the process of seceding.

Ausflag already has a flag lined up for them and McGowan clearly dreams of being the president of a country, so why not? Given McGowan has come to China’s defence previously, Western Australia could re-brand itself as ‘South-West China’. It’s not like Scott Morrison would object. He does not seem to have any qualms with the way the entire western side of the country he is supposed to be leading is going.

In all seriousness, Mark McGowan is a tinpot dictator holding an entire state hostage while depriving a village somewhere of an idiot. He must come to the realisation (although I doubt he will) that when Western Australia does open the border, they are going to end up flooded with cases. It does not matter if 100 per cent of the state are triple-vaxxed, quadruple masked, and socially distant, Omicron is going to hit them just like it has done everywhere else without discrimination.

Hiding from it at this point is futile. So Mad Mark – if not now, when?

4 thoughts on “Madman Mark McGowan – the tinpot dictator of Australia”