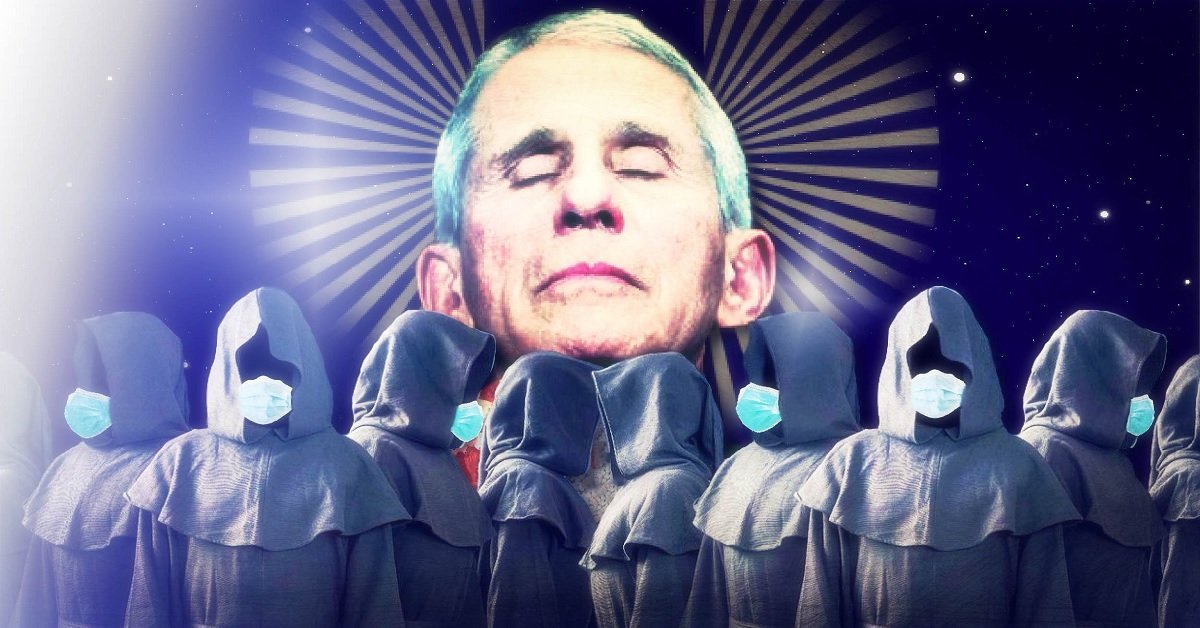 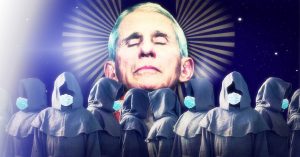 All at once, the powers that be want Covid-19 to be finished. Mere weeks ago, the CDC wanted Americans to wear face masks almost everywhere they went. Now, masks are out. The CDC says people with vaccines no longer need to wear them. They’ve become optional in Virginia and in Andrew Cuomo’s authoritarian bailiwick of New York. It’s amazing what one month of really bad jobs numbers can do to the science.

Whatever its political shortcomings, the Biden administration wants the country reopened and things (mostly) back to normal so they can reap the political dividends of undoing the calamitous lockdowns that liberal ideology created in the first place.

There’s just one problem: The regime’s propaganda was too effective. Millions of loyal cattle are too traumatized to go back to their old way of life. In a recent poll conducted by The Hill, forty-two percent of registered voters and a majority of Democrats said that, regardless of advice from the CDC or other health officials, everybody should still wear masks outdoors no matter what:

For a great many on the left, if not an outright majority, mask mania has become a deeply personal commitment. Despite all the babbling for a year about “trusting the science,” when the official science says to stop wearing masks, millions of the Globalist American Empire’s cattle are proving more loyal to masks than to science. In fact, as a recent MIT investigation discovered, vaccine and mask skeptics are more likely to have seriously weighed the science in question.

What is happening right now with masks isn’t science. It’s a new cult, created through a mix of political pressure and old-fashioned terror. This cult, created almost by accident, is now too entrenched and too powerful to be turned off by the people who created it.

Even now, step outside in New York City and more than half the passersby will be masked up, CDC and vaccination status be damned. A New York Times article released Monday profiled the sad story of Americans so mentally broken they plan to keep wearing masks, possibly forever.

Whenever Joe Glickman heads out for groceries, he places an N95 mask over his face and tugs a cloth mask on top of it. He then pulls on a pair of goggles.

He has used this safety protocol for the past 14 months. It did not change after he contracted the coronavirus last November. It didn’t budge when, earlier this month, he became fully vaccinated. And even though President Biden said on Thursday that fully vaccinated people do not have to wear a mask, Mr. Glickman said he planned to stay the course.

In fact, he said, he plans to do his grocery run double-masked and goggled for at least the next five years. [New York Times]

The saddest thing of all about Glickman’s routine is that it didn’t even work. He still got the coronavirus (and presumably, like most Americans, was barely affected). Yet he doggedly persists in this hypochondriac religious ritual, and plans to keep at it for years to come.

According to the Times, Glickman and others like him are motivated by the existence of a “sizable faction of vaccine holdouts.”

“I’m in no hurry; why should I be in a hurry?” said Mr. Jones, who became fully vaccinated about a month and a half ago. Until New York City reaches a higher level of vaccination — just 40 percent are completely vaccinated — he believes it’s too risky to unmask.

From a supposed science-based perspective, this is incoherent. The vaccine is supposed to render one immune to the virus; those who choose to forego the vaccine are only endangering themselves. Yet everywhere, America is flooded with vaccinated Americans who profess to live in terror of the unvaccinated amongst them.

The maskers of 2021, who no doubt fancy themselves supporters of “The Science,” have created a much more jumbled version of reality. In their moral universe, only masks guard against coronavirus, and the vaccine is entirely useless; receiving it is only a totem of whether one has sword allegiance to The Science or not. It might as well be a tattoo of Dr. Fauci’s face.

This is about more than personal signaling. What we are seeing is nothing less than a government-induced psychic collapse inflicted on millions of people. For a year, America’s ruling regime blasted non-stop propaganda at the public: Stay indoors, mask up, hide your children, self-isolate, get the vaccine (no matter what your age is), etc. The only acceptable normal activity was mass protest/rioting in support of BLM.

All of this was done cynically, from the very start, because wearing a mask outside was always pointless. As even The New York Times has admitted, the danger of outdoor coronavirus transmission has long been known to be almost non-existent. But the CDC went ahead and recommended it anyway, for months:

When the Centers for Disease Control and Prevention released new guidelines last month for mask wearing, it announced that “less than 10 percent” of Covid-19 transmission was occurring outdoors. Media organizations repeated the statistic, and it quickly became a standard description of the frequency of outdoor transmission.

That benchmark “seems to be a huge exaggeration,” as Dr. Muge Cevik, a virologist at the University of St. Andrews, said. In truth, the share of transmission that has occurred outdoors seems to be below 1 percent and may be below 0.1 percent, multiple epidemiologists told me. The rare outdoor transmission that has happened almost all seems to have involved crowded places or close conversation. Saying that less than 10 percent of Covid transmission occurs outdoors is akin to saying that sharks attack fewer than 20,000 swimmers a year. [New York Times]

In other words, the science was clear: Outdoor masks were pointless, and the CDC knew it long ago. But for a year, they decided it was useful to teach Americans otherwise.

Why did the CDC, the Biden Administration, and countless state and local governments create this cult in the first place? Above all, it was the need to exert control. The Globalist American Empire’s claim to power is based on “expertise,” a supposed superiority in knowledge and merit that gives them the right to impose authoritarian diktats on the population (and, if necessary, prohibit public dissent as “misinformation”). These are turbulent transformational times, and the mask mandates created a false sense of structure and competence, a sense that leaders had the slightest idea what they were doing and weren’t just making everything up day to day.

In their bid to control the American public, America’s health and safety autocrats stoked the Great Mask Panic. Masking became far more than a piece of health advice. It became a totemic device, a way to divide the good from evildoers.

This need to exert control is still present even now, as the Biden administration flails about trying to reopen the country and stimulate a stagflating economy. For instance, even as the CDC claims that masks are not needed indoors, the TSA is still demanding that Americans remain masked while flying for months to come:

Wearing a face mask will continue to be a requirement at airports, aboard commercial flights and on other public transportation across the country through the summer.

The federal mask mandate, which was set to expire on May 11, will remain in effect through Sept. 13, according to updated guidance issued by the Transportation Security Administration on Friday. [NPR]

What’s the supposed “scientific” justification for this? There is none. Due to the nature of air circulation inside airplanes, the risk of contracting Covid while on a plane is substantially lower than the risk from almost any other indoor environment.

The image above dates to October of last year. The science has been available for months. But the airplane mask mandate staggers onward relentlessly, because maintaining it has nothing to do with public health. It’s about projecting a sense of control over events and signaling through meaningless gestures. At this point, it may also be about keeping the peace as well. America’s frequent-flier class are among the most susceptible to regime propaganda, and among the most fervent acolytes of the new mask cult. Reprogramming them into the new anti-mask narrative will take some time.

The Cult of the Mask reveals the nature of political power in America. Last year, the two great political constants from America’s power institutions was mass Covid hysteria (in favor of masks and lockdowns) and massive public agitation for “racial justice.” These two causes were in direct conflict with one another, with only three things in common: Both justified stripping once-sacred rights from the American people, both concentrated even more power in the hands of the existing ruling class, and both were built on propaganda rather than reality.

Think about the foremost images of 2020. On the one hand, the BLM/Antifa rioter tearing down statues, looting stores, and terrorizing cities. On the other hand, the meek SWPL dutifully wearing his mask, isolating at home, perhaps refusing to go outside for months. Superficially, the two couldn’t be more different: The height of rebellion versus the height of compliance. But think again. Both were actually demonstrating their dependence and fealty to our corrupt Regime.

BLM thought they were attacking the existing power structure, when in reality every powerful institution supported them. Mask cultists believe they were devotees of science, but the exact opposite was true; the only thing they were devoted to was the mask, and the regime.  That’s the common denominator in all of this: A regime desperate for power and a population of willing if unwitting slaves.

This whole saga shows that power in America doesn’t rest with “the people.” In a mass democracy such as ours, power rests with those who control the levers of propaganda and mass psychology. Without the mass media apparatus’ enthusiastic complicity the spectacle described above would not be possible.

The good news is that both the BLM riots and the anti-scientific mask mania show that this corrupt system is coming apart. The regime has shored up its power, but it has squandered the ultimate root of its authority, legitimacy. By enabling massive riots and suicidal anti-scientific Covid hysteria, the Globalist American Empire has showed that its power is incompatible with a functioning, thriving society. Instead, every consolidation by the regime forces it to reveal its underlying dysfunction.

This system will not be able to pose as a real “democracy” for long. Every day, filth becomes more and more visible, and collapse draws closer and closer. Soon, this broken regime will crumble completely, to be replaced by one worthy of the people it governs.