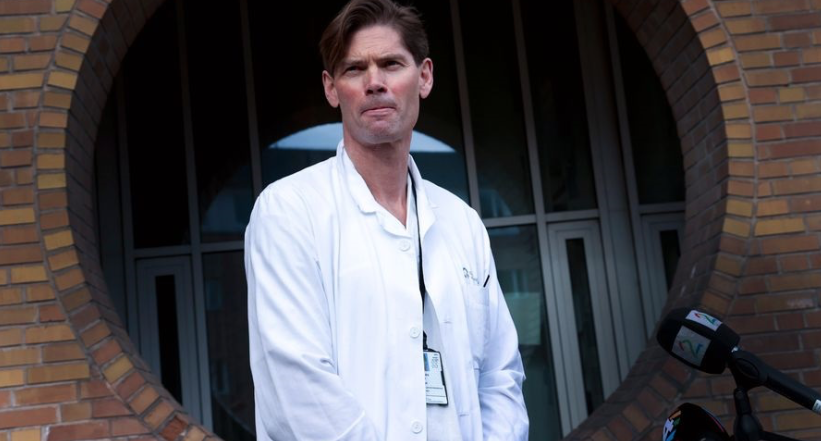 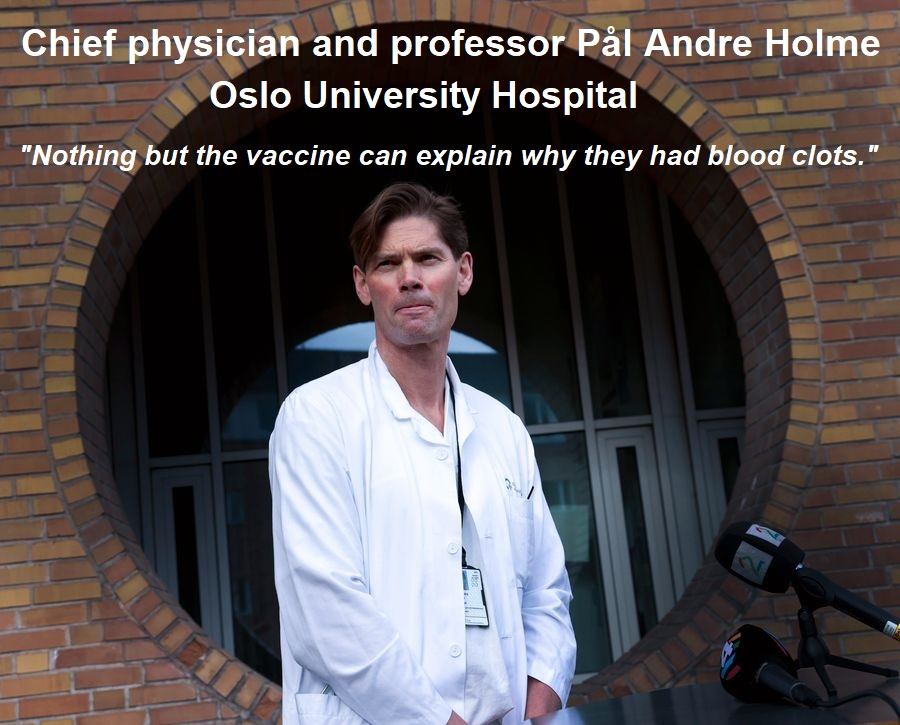 A Norwegian physician and professor of medicine at Oslo University Hospital,  Pål Andre Holme, held a press conference earlier today to announce the results of their investigation into three healthcare workers under the age of 50 in Norway who developed blood clots following the AstraZeneca experimental vaccine, resulting in the death of one of them.

Dr. Holme confirmed that the AstraZeneca vaccine was the cause of the blood clots.

Chief physician and professor Pål Andre Holme told Norwegian papers on Thursday, just hours before the EMA was set to release the findings of its promised “safety review” (which was conducted even more hastily than the initial vaccine studies), that he has a new theory about what caused the reactions in the health workers, and unfortunately, per Holme, the AstraZeneca jab acted as the trigger.

“The reason for the condition of our patients has been found,” chief physician and professor Pål Andre Holme announced to Norwegian national newspaper VG today.

He has lead the work to find out why three health workers under the age of 50 were hospitalized with serious blood clots and low levels of blood platelets after having taken the AstraZeneca Covid vaccine. One of the health workers died on Monday.

The experts have worked on a theory that it was in fact the vaccine which triggered an unexpected and powerful immune response – a theory they now believe they have confirmed.

“Our theory that this is a powerful immune response which most likely was caused by the vaccine has been found.

In collaboration with experts in the field from the University Hospital of North Norway HF, we have found specific antibodies against blood platelets that can cause these reactions, and which we know from other fields of medicine, but then with medical drugs as the cause of the reaction,” the chief physician explains to VG.

Though he acknowledged the theory was just that – a theory, Holme insisted there was nothing else that could have triggered such an intense immune response in all three patients. The vaccine was the only common factor.

When asked to clarify why he says “most likely” in the quote, Holme confidently responds that the reason for these rare cases of blood clots has been found.

“We have the reason. Nothing but the vaccine can explain why these individuals had this immune response,” he states.

VG also asks how Holme can know that the immune response is not caused by something other than the vaccine.

“There is nothing in the patient history of these individuals that can give such a powerful immune response. I am confident that the antibodies that we have found are the cause, and I see no other explanation than it being the vaccine which triggers it,” he responds.

In an attempt to explain to readers why they should care, Holme concluded: “We’re talking about relatively young people that have become very sick here, and died, that probably wouldn’t have got such a serious case of Covid.” 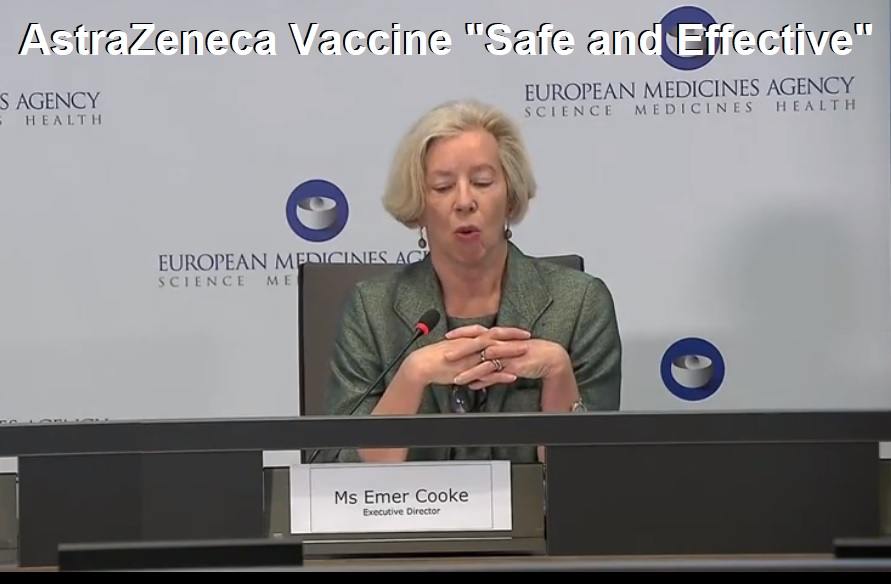 However, just hours after Dr. Holme’s press conference, the European Medicines Agency (EMA) also held a press conference to announce the results of their investigation over the reports of fatal blood clots.

Predictably, their result was more in favor of the pharmaceutical company AstraZeneca, and not patient rights and safety concerns. They concluded that there was no link between the AstraZeneca experimental COVID vaccines and the fatal blood clots, and urged countries to resume vaccinations because “the benefits outweigh the risks.”

The EMA confirmed Thursday the results of its safety review: namely, that the benefits of the AstraZeneca vaccine far outweigh any side effects.

After looking into the reports of incidences of rare blood clots, the agency has concluded that the vaccine is “safe and effective” and that it is “not associated with any blood clots.”

Dr. Sabine Strauss, who spoke after Emer Cooke, the agency’s executive director, claimed the agency has been working long and hard since the first cases emerged last week.

Scientists examined suspect batches and looked at the numbers of suspicious cases vs. the denominator of more than 11MM vaccines distributed and concluded that the AstraZeneca jab is safe enough, before arriving at a shocking admission.

Dr. Strauss acknowledged that the agency saw clots develop “in a few cases” and even saw clots develop in the brain. The condition was linked to low levels of blood platelets, just as a top Norway doctor suggested earlier.

However, the agency doesn’t have enough evidence to establish a definitive link.

So who would you trust to give you truthful advice on the AstraZeneca experimental vaccines? A university chief physician and professor of medicine who is just trying to find the cause of these blood clots and has no financial interest in the results, or government health agency bureaucrats comprised of Big Pharma insiders?

I predict that every single country that has halted the AstraZeneca experimental vaccines will eventually resume them in the days and weeks ahead.

I also predict that the U.S. FDA will issue an EUA to AstraZeneca in the weeks ahead to start using their experimental COVID vaccine in the U.S., where tens of millions of doses are already stockpiled.

I seriously doubt that Tanzania President John Magufuli’s sudden death yesterday after being missing for almost 3 weeks was an accident, but probably a well-timed murder to serve as an example to anyone else in a position of national authority who could prevent the rapid roll-out of these eugenic experimental COVID vaccines, that the Big Pharma cartel will go after anyone who stands in their way.

If you have not figured out this one truth yet, you need to figure it out now, as your life depends upon it: YOU and YOU alone are responsible for your health and the consequences of taking an experimental vaccine that can alter your DNA and either kill you or maim you for life.

Because many dissenting doctors and scientists have already issued the warning that there are no cures for the side effects of these experimental vaccines. There is no going back and undoing the damage they may cause. And there is no hope for financial compensation because the pharmaceutical companies basically have legal immunity due to the “pandemic.”

The COVID “virus,” on the other hand, has a 100% cure rate with simple natural remedies such as high dose Vitamin C and Vitamin D, or by using older, already FDA approved safer drugs, such as Hydroxychloroquine or Ivermectin.

Literally THOUSANDS of doctors around the world testify to the efficacy of these simpler treatments that they have used successfully with their COVID patients.