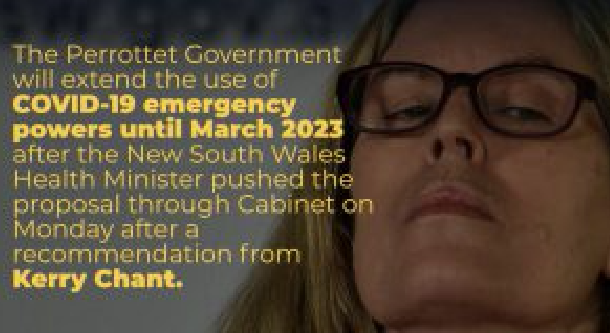 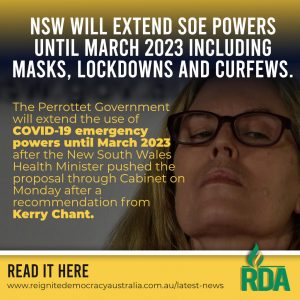 These sick demons must be stopped and brought to justice and the people must rise up now!!!

The controversial powers used to enforce mask mandates, lockdowns and curfews in NSW look set to be extended until 2023 after Cabinet approved a plan to lock them in for an additional 17 months.

The Perrottet Government will extend the use of COVID-19 emergency powers until March 2023 after the New South Wales Health Minister pushed the proposal through Cabinet on Monday.

Cabinet approved Brad Hazzard’s proposal on Monday night which has led to backlash from some Coalition MPs, according to The Australian.

Mr Hazzard’s proposal to extend the powers comes off the back of a recommendation from Chief Health Officer Kerry Chant.

Under the state of emergency powers, the Health Minister has jurisdiction to declare Public Health Orders including restriction of movement, mask mandates, curfews and lockdowns.

The Australian has reported the Health Minister took the proposal to a party room meeting on Tuesday where multiple MPs challenged the necessity for the powers to be extended until March 2023.

One thought on “NSW will extend SOE powers until March 2023 including masks, lockdowns and curfews”