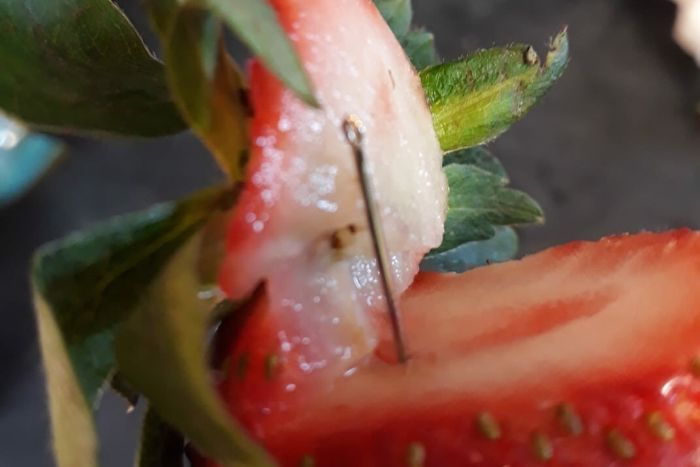 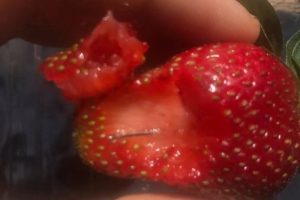 Strawberry needle scare: What you need to know, and what to do if it happens to you

The Queensland Strawberry Growers Association suspects a disgruntled ex-employee was behind the sewing needles found in a number of strawberries sold by Woolworths.

In a statement, the association said it had “reason to suspect” it was a former employee and was waiting on more information from Queensland police.

Police and Queensland Health have warned consumers to dispose or return punnets of two brands of strawberries — Berry Licious and Berry Obsession — which were sold in Queensland, New South Wales and Victoria.

Queensland chief health officer Dr Jeannette Young said the contaminated brands came from a farm in south-east Queensland, and were sold to Woolworths, but could also have been distributed to other stores.

“If they do have any strawberries it would be safest to dispose of them,” Dr Young said.

Strawberries Australia’s industry development officer Jennifer Rowling said it was an isolated incident and strawberries in general were safe to eat, recommending people “chop them in half”, if they were still concerned.

Man in hospital after swallowing ‘half a sewing needle’

Dr Young said three incidents have been reported to police, including one in Queensland and two in Victoria.

“One person did consume a contaminated strawberry and they’re being assessed at the moment,” she said.

A Facebook user posted a warning several days ago about a punnet of Berry Obsession strawberries purchased from Woolworths at the Strathpine Centre on Brisbane’s northside, after his friend swallowed “half a sewing needle”.

“We then checked the other strawberries and found another sewing needle lodged inside one of them,” Joshua Gane said.

“We are now at the ER because he subsequently started experiencing severe abdominal pain.”

Mr Gane later said they received a call from the store manager at the Strathpine Centre who said it would be issuing a total recall on all of the punnets.

“They suspect it is foul play, but unsure whether it was via the supplier, Woolworths or a customer,” the post said.

“[It’s been done] obviously to injure somebody,” he said.

“Police have spoken to the person who operates the farm and they are assisting us with our inquiries,” he said.

Authorities across the three states were investigating to find the culprits.

In a statement, a spokesperson for Woolworths said it had taken the contaminated strawberries from the shelves, while the incident was being investigated with the suppliers.

“Customers are advised to return these products to their local Woolworths for a full refund,” the spokesperson said.

Police believe they have contained the threat and assured consumers would be able to safely buy strawberries again from Thursday, when stock is replaced.