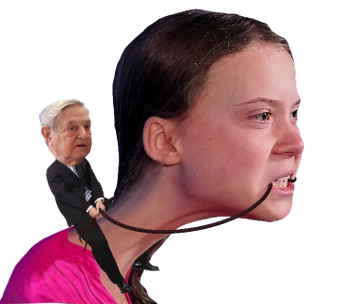 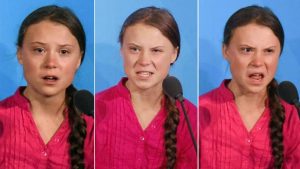 The New World Order globalist cabal is obviously desperate to the extreme where it concerns generating climate change hysteria.

That they would use an autistic or Asperger’s suffering teenage girl (her parents said so) to promote the utterly fake Global Warming narrative is beyond the beyond.

Truly, the incorrigible NWO cabal of criminally insane psychopaths has proven that they will do anything whatsoever — no matter how depraved or immoral — in order to shove the Global Warming hoax down everyone’s throat.

With the world tour taken by Greta Thunberg, it’s clear that the cabal does not care how many enemies the poor little girl will make .. … … as long as she galvanizes the worldwide climate change movement.

Greta has already made enemies of many VIPs who are onto her phony climate change ministry including Donald Trump and Emmanuel Macron. Thunberg has also made enemies of entire nations with her recent lawsuit filed against Argentina, Brazil, France, Germany, and Turkey.

The Climate Chaos crowd doesn’t even care how many children are scared out of their wits because fear-mongers like Greta and AOC scream that the world will end in 10 or 20 years due to a climate-triggered Extinction Level Event.

KEY POINT: What the Global Warming hoaxers always forget to mention is that the very real climate chaos being geoengineered daily around the globe has nothing to do with human activity-generated CO2. All the wacky weather and climate chaos is being covertly manufactured via chemical geoengineering and HAARP. In order words, this global psyop is a classic Problem~Reaction~Solution black operation being conducted by the NWO globalists. See: Geoengineering Is The Primary Cause Of Global Climate Change, Not CO2

For anyone who wants to know the back story concerning Greta Thunberg, please read the comment section under the following article: Macron Slams Greta Thunberg After Teenage Activist Sues France Over Climate – But Leaves Out China

The Cult of Greta Thunberg

This particular piece of the fastidiously run Climate Chaos psyop was years in the making and actually began with the family of Greta Thunberg.

Her well-known parents in Sweden are opera star Malena Ernman and actor Svante Thunberg. See the photograph below.

Greta Thunberg’s parents: These two psyop operatives are laughing at all of us…all the way to the bank—Soros’ bank

Just think of the Thunberg family as a typical HOLLYWOOD family … only they’re living in Sweden. Need we say more?!

Clearly, Greta’s parents are both master and handler.

Who knows what mind-control programs have been inserted in this teenager’s mind?

Who knows how many vaccines she has been given in light of where she stands on the Autism spectrum?

Who knows how many powerful psychotropic pharmaceutical drugs she’s on in an effort to carefully control her performances.

Who knows how many psychiatrists and psychologists attend to her fabricated needs?

The Climate Chaos screed she just gave at the Climate Action Summit at the United Nations was quite impressive indeed; it was quite reminiscent of another Swedish actress— Ingrid Bergman, yes? See: Greta Thunberg gives the BEST ‘fire and brimstone sermon’ ever for the fake church of Global Warming (Video)

It’s obvious that Greta’s parents wanted to be a smashing success but never quite made it in the big leagues. Hence, what better way to wow the global audience than to prop up your autistic daughter on 24/7 news stations across the planet.

Not only that, they’re now all set for life with the likes of George Soros funding the whole black operation with his dirty money.

There are multiple goals behind this extraordinary enterprise to generate unparalleled fear around the geoengineered climate change. The most important objective is, of course, to fabricate a ruse in order to establish a One World Government. As follows:

However, the means by which the New World Order agenda is being furtively implemented is through a multitude of Deep State-controlled corporations. Each of these business entities stands to gain enormously by advancing the Global Warming hoax.

Those immense profits alone (think carbon trades) have been enough to keep this scam going on auto-pilot for years. When you add the myriad commercial venture start-ups that have occurred since the beginning of this vast criminal conspiracy, it becomes clear why so many now believe in this obvious hoax; they’re somehow invested in it.

Greta the Grinch pictured with Pierre Casiraghi, skipper of the carbon-neutral Malizia II yacht, and driver of not so carbon neutral racing cars, is grandson of Rainier III, Prince of Monaco, and American actress Grace Kelly. So, her yacht sailers are race car drivers. How carbon neutral is that?!?!

GRETAgate has been great for exposing the whole sham, and especially the patently fraudulent Global Warming narrative.

The more Soros & Company trot Greta onto the world stage, the more the people of the planet will catch on to the melodramatic deceit.

But make no mistake about it: Greta’s good! VERY GOOD ! ! ! Surely she’ll secure a nice big fat contract from Hollyweird when she’s through with this gig.

Teaching Moment: No one does a better dog and pony show than the globalists as their new poodle Greta dramatically demonstrates.

Lastly, anyone who really want to see with their own eyes what’s really causing all the Climate Chaos, please click on the following photo-documentary: CHEMTRAILS: A Planetary Catastrophe Created by Geoengineering

Special Note: The $64,000 question about GRETAgate is: How are Greta and her parents being totally controlled and manipulated by their Pedogate overseers? See:
P E D O G A T E: A Global Child Trafficking and Exploitation Crime Syndicate