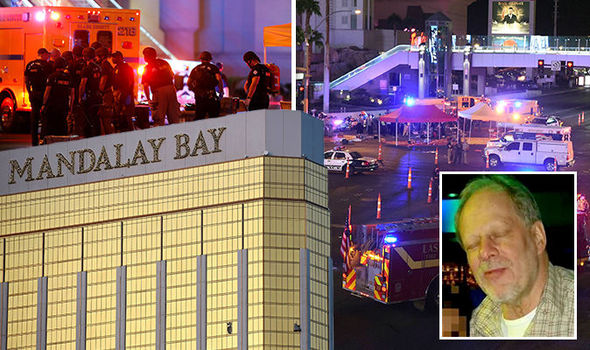 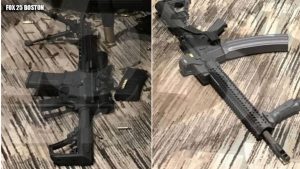 How did he get all those weapons into his hotel suite?

Daily Mail: “…Jill Sneider of the ATF said that no less than 12 of the rifles found in the room had bump-stock modifications.”

That’s a lot of weight. That’s a lot of steel. How did Stephen Paddock, the purported Vegas shooter, get all those weapons into his Mandalay Hotel suite?

Are we supposed to believe no red flags went up? No alarms were triggered?

He had no help? No help from the inside?

On top of that, why did he take all those weapons into the suite? He certainly wasn’t going to use all of them.

It’s easy to say, “He did all that because he was crazy, and there is no way to analyze crazy.” If investigations proceeded on that premise, they wouldn’t be investigations.

Confronted with this pile of weaponry in a suite, after a mass shooting, it would be reasonable to ask, “Did the accused shooter actually bring all these guns in himself?” And further: “Was this some kind of set-up, carried out to forward a “take the guns away from everybody” agenda?

Yes, that would open the door to a very murky area—constructing an alternative time line of events leading up to the shooting. Nevertheless, a true investigation would explore this area. Although police and FBI aren’t talking about it, you can bet a few officers are at least looking into the possibility that Paddock had help bringing all that weaponry into his suite.

Are we to assume the Mandalay Hotel security system is a sieve? They just wave everyone through without a flicker of doubt, with millions of dollars on the premises and millions more being bet in real time in the casino? It’s just a party?

Pit bosses on the floor and eyes in the sky can spot a cheater who is counting cards at a blackjack table, but no one is able to notice a well-known high stakes gambler (Paddock) dragging many suitcases through the premises up into his suite? Really?

The aftermath of the concert shooting has turned into an ideal opportunity for gun control and a stepped up Surveillance State. The presence of so many guns in Paddock’s suite makes a perfect photo op for these agendas. 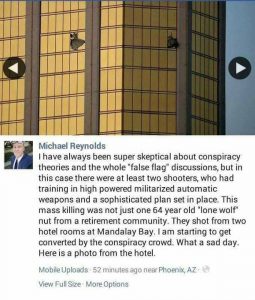 As more background emerges on Stephen Paddock, we discover he isn’t just a burrito-eating retiree living outside Vegas. According to the press, he’s a millionaire real estate investor. He has many options in life. But he makes a plan to end that life. He surely knows that’s what is going to happen. He wants it to happen. He launches an operation over the course of months to bring about his death.

Yes, it’s possible. And the Valium he’s taking could push him over the edge, because it can cause aggression in some people. Nevertheless, we’re supposed to believe, without explanation, that his impulse for destruction and self-destruction was far more than just a moment’s snap decision. It was embedded in a carefully wrought design. Paddock laid out a sequence of events that would culminate in his “suicide by cop.” We’re supposed to take that as an article of faith.

Or…was this operation something else entirely? Was, for example Paddock, as a gun enthusiast, profiled and targeted and used by a team intent on carrying out the concert shooting?

Was he a patsy?

Was he a Lee Oswald, a Sirhan Sirhan, a James Earl Ray?

The use of patsies varies. The set-ups can be complex. There is more than just one possible pattern. For example, in the case of the 1995 Oklahoma City Bombing, Tim McVeigh, to the degree he may have been involved, was only used to get a Ryder Truck to the curb outside the Murrah Federal Building on the morning of April 19th.

We are assured there was an ANFO bomb in the truck (ammonium nitrate plus fuel oil). Seven or eight barrels were linked up to go off at once. Of course, making that happen would take a considerable degree of expertise—beyond McVeigh’s skill. The explosions in the barrels must be simultaneous; otherwise, you’re left with no force and fertilizer all over the street.

Still further, it turns out that, even with a simultaneous ignition, the force and direction of the blast were insufficient to cause the degree and profile of the damage sustained by the Murrah Building. That bomb was a diversion and a distraction.

One alternative explanation: as the bomb in the Ryder truck went off, pillars of the building—which had previously been wired with explosives—were triggered. Those explosives caused the actual damage.

But McVeigh, the “Ryder truck man,” became the face of the crime. He was the “lone bomber.”

The public is taught to believe sophistication in the use of patsies is impossible.

The public is wrong.

The role of Stephen Paddock in the concert shooting cannot be accepted blindly as the press details it.

4 thoughts on “Was the Vegas shooter a patsy?”