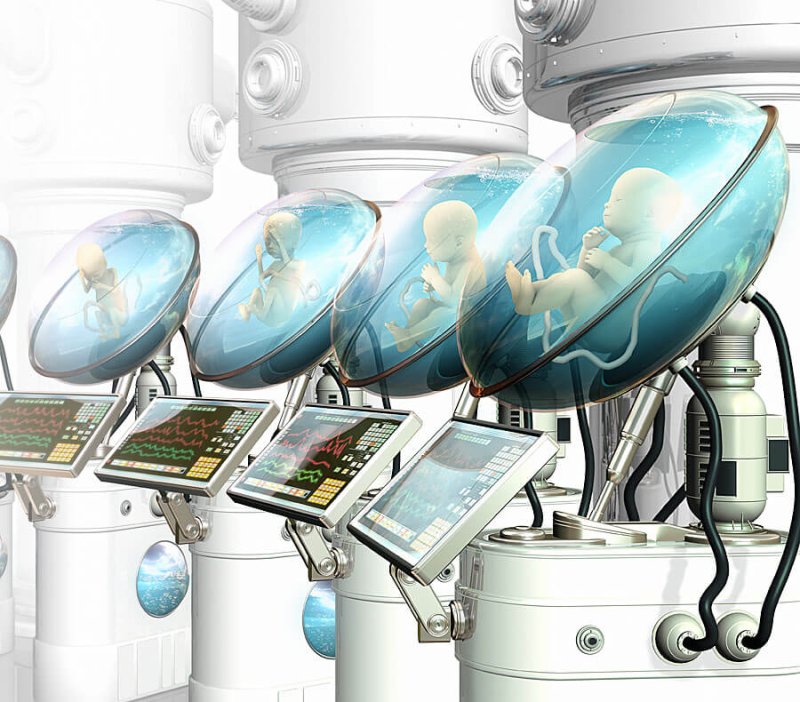 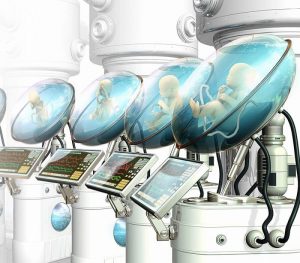 Scientifically, it’s called ectogenesis, a term coined by J.B.S. Haldane in 1924. A hugely influential science popularizer, Haldane did for his generation what Carl Sagan did later in the century. He got people thinking and talking about the implications of science and technology on our civilization, and did not shy away from inventing new words in order to do so. Describing ectogenesis as pregnancy occurring in an artificial environment, from fertilization to birth, Haldane predicted that by 2074 this would account for more than 70 percent of human births.

Where are we on the road to ectogenesis right now? To begin, progress has definitely been rapid over the last 20-30 years. In the mid 1990s, Japanese investigators succeeded in maintaining goat fetuses for weeks in a machine containing artificial amniotic fluid. At the same time, the recent decades have seen rapid advancement in neonatal intensive care that is pushing back the minimum gestational age from which human fetuses can be kept alive. Today, it is possible for a preterm fetus to survive when removed from the mother at a gestational age of slightly less than 22 weeks. That’s only a little more than halfway through the pregnancy (normally 40 weeks). And while rescuing an infant delivered at such an early point requires sophisticated, expensive equipment and care, the capability continues to increase.

A comprehensive review published by the New York Academy of Sciences three years ago highlights a series of achievements by various research groups using ex vivo (out of the body) uterus environments to support mammalian fetuses early in pregnancy. Essentially, two areas of biotechnology are developing rapidly that potentially can enable ectogenesis in humans, and, along the way, what the authors of the Academy review call partial ectogenesis.

Because a fetus develops substantially with respect to external form and internal organs during the second half of pregnancy, our current capability to deliver and maintain preterm infants actually is a kind of partial ectogenesis. Supported by all of the equipment in the neonatal intensive care unit (NICU), a premature infant continues its development as a normal fetus of the same gestational age would do inside the mother’s uterus, but with one important exception. Inside the womb, oxygenated, nourished blood comes in, and blood carrying waste goes out, through the placenta and umbilical cord. Once delivered, however, a preemie must breathe through its lungs, cleanse the blood with its liver and kidneys, and get nutrition through its gastrointestinal tract.

But because these organ systems, especially the lungs, are not really ready to do their job so early, there is a limit to how early a developing fetus can be transferred from womb to NICU. Known as viability, the limit definitely has been pushed back with special treatments given to the mother prior to delivery and, just after birth, directly into the preemie’s lungs, and with intensive support. But the 22 week gestational age may be around the absolute limit for survival for a fetus that will have to depend on lung-breathing, not to mention other organs, rather than its mother’s nourished blood.

Still, the capability to push back the limit is around the corner. One of the two developing key technologies is the artificial amniotic fluid filled environment that has continued to develop with laboratory animal models since the work with goats in the 1990s. The other area is embryo transfer. Not only can a developing mammal be transferred from the uterus of its own mother to that of a surrogate, but gradually investigators are reproducing the endometrium–the cell layer of the uterus that contains and nourishes the pregnancy–as a cell culture, or an in vitro model. The convergence of these technologies will make it possible to transfer a developing human into a system that includes the placenta and umbilical cord and supplies all consumables (oxygen and food), and removes all waste, directly through the blood.

Thus, survival and continuing development would not depend on the lungs and other organs being ready yet to do their job. Applying such a system to fetus delivered in the middle of pregnancy would constitute real partial ectogenesis. Furthermore, since bypassing the developing, not fully functional organs, stands to improve survival substantially, and might even decrease the costs of extreme premature birth, the movement of the technology from research to clinic is inevitable.

Once that happens, there will be no obstacle against pushing the limit further, toward full ectogenesis. But there will be no obstacle to pushing the limit akin to how lung viability has placed an obstacle to conventional pre-term care. At some point, an in vitro fertilized egg could be planted directly into the artificial womb, with no need for a natural uterus even for the early stages.

An artificial womb may sound futuristic, and in Haldane’s time this may have supported a perception that realizing the technology would go together with controlling the birth rate and eugenics controlling which humans come to life, and thus which genetic traits get passed down to future populations. But today, we could do these things without ectogenesis. We have plenty of contraceptive methods and can sterilize people, or make them more fertile, while pregnancies can be induced with implanted embryos made with in vitro fertilization.

If anyone is working on a eugenics program at present, they can use surrogate mothers and don’t really require an artificial uterus–unless, we imagine a society that routinely, forcefully sterilizes all females, so that whoever has the artificial uterus has a monopoly on reproduction, ectogenesis does not relate particularly to those 1920s issues. Instead, the artificial uterus would simply move the pregnancy outside of the woman’s body. When considering societal consequences, that’s the main factor that we need to keep in mind, and doing so we see that it does relate to many currently controversial issues.

Considering abortion, for instance, while the proposition that a fetus, even an embryo, is a person with a “right to life” is a religious belief that cannot be imposed on everyone else, the main argument for the right to choose is a woman’s right to control her body. If a developing embryo or fetus is not viable and the mother wants it out of her uterus, that’s her right.

But what happens once we have the technology to remove it from her without killing it and let the pregnancy continue in an artificial womb? Already, with NICU technology pushing back the survival limit, the timing of viability affecting the legality of abortion, has been challenged by abortion foes. The prospect of ectogenesis stands to turn the viability issue on its face, and it will be interesting to see where that leads.

While social conservatives might be receptive about what an artificial uterus might do to the abortion paradigm, make no mistake they’d probably not be happy that the technology also stands to make it much easier for male gay couples to have babies. All they’d need is an egg donor; no more need for a surrogate mother to take the embryo into her uterus and carry it for 40 weeks. That’s easier for any gay couple in terms of practicality, waiting periods, and money. The same thing goes for a transgender person wishing to have a child.

Finally, because of the sheer numbers, the artificial uterus could have major implications for heterosexual women with fully functional uteri. Many who want children of their own might prefer to forego pregnancy yet would hesitate to hire a human surrogate. Not only is it expensive, but the surrogate could grow fond of the fetus she’s carrying, so why bother taking the risk?

On the other hand, the mind set could be quite different if the surrogate were a high tech jar. It’s your baby with no worries about competing mothers. I’m not suggesting that all potential mothers would opt for this, but Haldane’s guess might not be so unrealistic in that it might end up being a substantial fraction of the population.

His prediction may yet be on target.

In discussing the idea in his work Daedalus–a reference to the inventor in Greek mythology who, through his inventions, strived to bring humans to the level of the gods–Haldane was diving into issues of his time, namely eugenics and the first widespread debates over contraception and population control.

Whether Haldane’s view will prove correct about the specific timing of when ectogenesis might become popular, or the numbers of children born that way, it’s certain that he was correct that tAt the same time, he was right that the societal implications are sure to be significant as the age of motherless birth approaches. They will not be the same societal implications that were highlighted in Daedalus, however.

David Warmflash is an astrobiologist, physician and science writer. Follow @CosmicEvolution to read what he is saying on Twitter.

One thought on “Artificial wombs: The coming era of motherless births?”