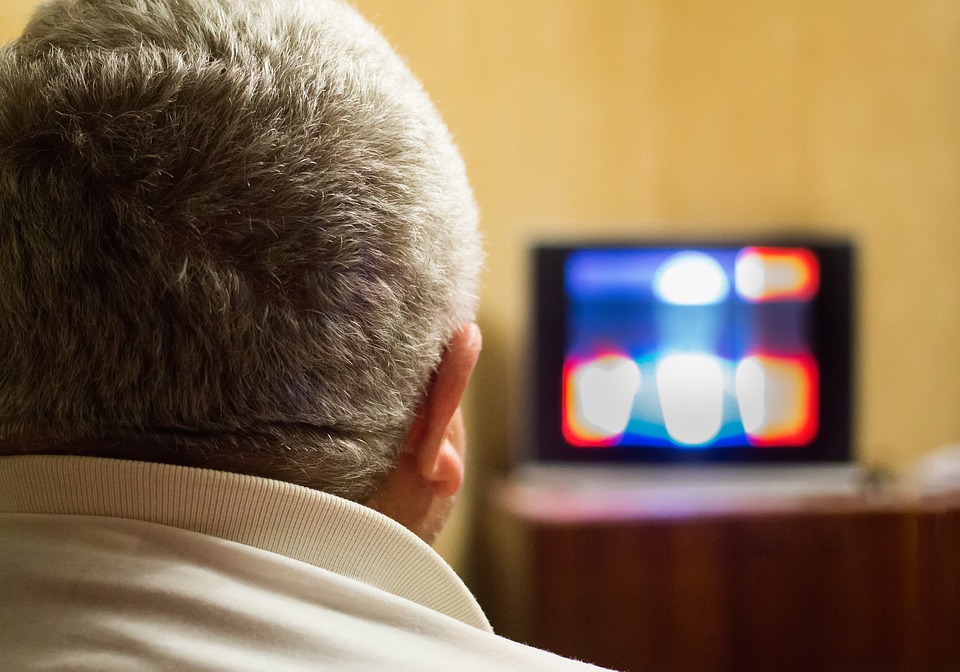 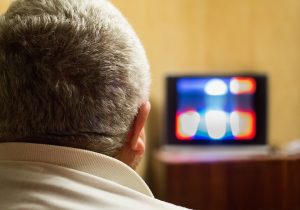 If you want to visualize this, imagine a rectangular solid. The news covers the top surface. Therefore, the viewer’s mind is trained to work in only two dimensions. Then it can’t fathom depth, and it certainly can’t appreciate the fact that the whole rectangular solid moves through time, the fourth dimension.

Focus on the network evening news. This is where the staging is done well—until recently.

First, we have the studio image itself, the colors in foreground and background, the blend of restful and charged hues. The anchor and his/her smooth style.

Then we have the shifting of venue from the studio to reporters in the field, demonstrating the reach of coverage: the planet. As if this equals authenticity.

Actually, those reporters in the field rarely dig up information on location. A correspondent standing on a rooftop in Cairo could just as well be positioned in a bathroom in a Las Vegas McDonald’s. His report would be identical.

The managing editor, usually the elite news anchor, chooses the stories to cover and has the final word on their sequence.

The anchor goes on the air: “Our top story tonight, more signs of gridlock today on Capitol Hill, as legislators walked out of a session on federal budget negotiations…”

The viewer fills in the context for the story: “Oh yes, the government. Gridlock is bad. Just like traffic on the I-5. A bad thing. We want the government to get something done, but they aren’t. These people are always arguing with each other. They don’t agree. They’re in conflict. Yes, conflict, just like on the cop shows.”

The anchor: “The Chinese government reports the new flu epidemic has spread to three provinces. Forty-two people have already died, and nearly a hundred are hospitalized…”

The viewer again supplies context, such as it is: “Flu. Dangerous. Epidemic. Could it arrive here? Get my flu shot.”

The anchor: “A new university study states that gun owners often stock up on weapons and ammunition…”

The viewer: “People with guns. Why do they need a dozen weapons? I don’t need a gun. The police have guns. Could I kill somebody if he broke into the house?”

The anchor: “Doctors at Yale University have made a discovery that could lead to new treatments in the battle against autism…”

Viewer: “That would be good. More research. Laboratory. The brain.”

If, at the end of the newscast, the viewer bothered to review the stories and his own reactions to them, he would realize he’d learned nothing. But reflection is not the game.

In fact, the flow of the news stories has washed over him and created very little except a sense of (false) continuity.

Therefore, every story on the news broadcast achieves the goal of keeping the context thin—night after night, year after year. The overall effect of this staging is: small viewer’s mind, small viewer’s understanding.

Next we come to words and pictures. More and more, news broadcasts are using the rudimentary film technique of a voice narrating what the viewer is seeing on the screen.

People are shouting and running and falling in a street. The anchor or a field reporter says: “The country is in turmoil. Parliament has suspended sessions for the third day in a row, as the government decides what to do about uprisings aimed at forcing democratic elections…”

Well, the voice must be right, because we’re seeing the pictures. If the voice said the riots were due to garbage-pickup cancellations, the viewer would believe that, too.

We see Building #7 of the WTC collapse. Must have been the result of a fire. The anchor tells us so. Words give meaning to pictures.

It mirrors what the human mind, in an infantile state, is always doing: looking at the world and seeking a brief summary to explain what that world is, at any given moment.

Since the dawn of time, untold billions of people have been urging a “television anchor” to “explain the pictures.”

The news gives them that precise solution, every night.

“Well, Mr. Jones,” the doctor says, as he pins X-rays to a screen in his office. “See this? Right here? We’ll need to start chemo immediately, and then we may have to remove most of your brain, and as a follow-up, take out one eye.”

Sure, why not? The patient saw the pictures and the anchor explained them.

Eventually, people get the idea and do it for themselves. They see things, they invent one-liners to explain them.

They’re their own anchors. They short-cut and undermine their own experience with vapid summaries of what it all means.

And then, of course, when the news cuts to commercial, the fake products take over:

“Well, every night they’re showing the same brand names, so those brands must be better than the unnamed alternatives.”

For “intelligent” viewers, there is another sober mainstream choice in America, a safety valve: PBS. That newscast tends to show more pictures from foreign lands.

“Yes, I watch PBS because they understand the planet is interconnected. It isn’t just about America. That’s good.”

Sure it’s good, if you want the same thin-context or false-context reports on events in other countries. Instead of the two minutes NBC might give you about momentous happenings in Syria, PBS will give you four minutes.

PBS’ experts seem kinder and gentler. “They’re nice and they’re more relaxed. I like that.”

Yes, the PBS experts are taking Valium, and they’re not drinking as much coffee as the CBS experts.

There are various forms of mind control. The one I’m describing here—the thinning of context—is universal. It confounds the mind by pretending depth doesn’t exist and is merely a fantasy.

The mind, before it is trained away from it, is always interested in depth.

Another way of putting it: the mind naturally wants more space, not less. Only constant conditioning can change this.

Eventually, when you say “mind,” people think you’re referring to the brain, or they don’t know what you’re talking about at all.

Mind control by eradicating the concept of mind.

That’s quite a trick.

But now, on the national evening news, something has changed. The quality of the elite anchors has plummeted. These mind-control pros are less and less capable of delivering: the voice of authority.

In the old days, you had Water Cronkite, Harry Reasoner, Chet Huntley, Tom Brokaw, and (before he crashed and burned) Dan Rather. Big-time fakers.

The ship is sinking.

Instead of trying to label their competition Fake News, the networks should look to themselves and try to figure out why they can’t find father figures to deliver their no-context broadcasts.

The audience is wising up. The correct notes on the scale of mind control aren’t being struck.

The system is falling apart.

When I named this site No More Fake News 17 years ago, I could see a fatigue factor setting in—not only in the mainstream news audience, but in the networks themselves. They were playing out the string, hoping to coast on their prior reputations. They weren’t just putting their viewers to sleep (their covert goal), they were slowly falling asleep themselves.

In the following years, the situation grew worse. The networks were moving on auto-pilot.

And now, they’re reaching the end of the line. They’re focusing on the only story that can deliver them ratings: Trump.

They fear him, they hate him—and they love him, because he gives them the numbers that justify their advertising rates.

It’s always problematical when the only thing maintaining your survival is your enemy. Especially an enemy whose whole method of attack is to accuse you of subverting your basic mission.

Since the dawn of time on this planet, news has been controlled, for good reason. The people who own the news are able to paint an overall surface of reality for the masses. Which has been their intent.

In a last-ditch attempt to save themselves now, the major networks are enlisting the help of big social media, in order to censor independent media. But even here, there is a problem. Millions and millions of people know where independent news sites are. They don’t have to go through Facebook and Twitter and You Tube (or Google) to find them.

Efforts at censorship strengthen the rebellion against major news outlets.

There are signs that social media are reaching the point of exhaustion. Their users are becoming fed up with the debilitating effects of playing the game. Accumulating followers and likes hasn’t turned out to be the key to happiness.

If these behemoths fall, what is left?

3 thoughts on “Fake news and the programmed viewer”