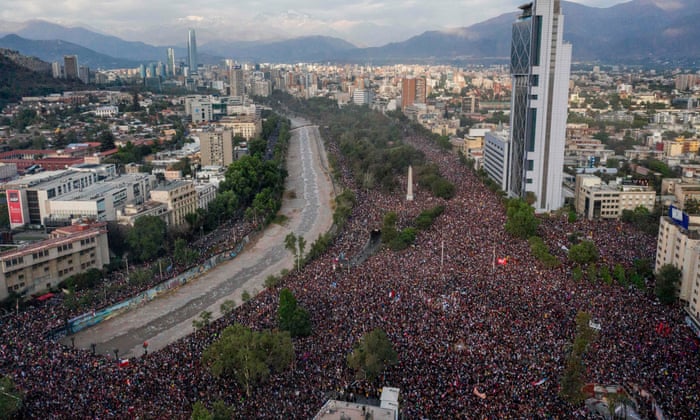 “The soldier was about 40m away. He looked at me and fired,” said Christopher Madrid, pointing to the patch above his right eye. “I swung away and the bullet grazed [my forehead] and came out, left a scar of four or five centimetres.”

Madrid, a 25-year-old student, was shot last Monday by Chilean army troops as he marched in a street protest near the Catholic University in central Santiago.

“Lots of people were going down with head wounds,” explained Madrid as he waited impatiently in Posta, a dilapidated health clinic where dozens of gunshot victims were being treated, including a close friend, shot three times in the head and once in the leg with “balines” – marble-sized bullets that are rarely fatal but can puncture a lung or take out an eye.

Hospital beds at Posta are usually filled with victims of traffic accidents and life-threatening cases of influenza, but the week-long Chilean uprising – the most serious unrest since the fall of Augusto Pinochet – has sent hundreds to the hospital with gunshot and head wounds and head fractures, and left at least 19 dead nationwide. Hospital staff at Posta are now working 24-hour shifts because a strict military curfew has thousands of soldiers patrolling the streets from late evening until dawn, making it dangerous and difficult for hospital staff to commute.

Patients at La Posta were dying, workers said, due to lack of basic supplies, including surgical gloves, syringes, masks

President Sebastián Piñera had declared that the authorities “are at war” with those who are marching, but yesterday he announced a cabinet reshuffle and said he would ease the military-enforced curfew. “I have put all my ministers on notice in order to restructure my cabinet to confront these new demands,” Piñera told reporters from the La Moneda presidential palace.

The lack of basic medical treatment for the largely working-class victims of gunshot wounds was notable inside Posta, as staff described shortages of supplies in the public health facilities and emphasised the gulf between services at this run-down structure and the gleaming private clinics just 10km away.

Patients at Posta were dying, workers said, due to the lack of basic supplies, including surgical gloves, syringes and masks. A dearth of small flasks for blood samples means patients go days without having blood work done, even in the 24-bed intensive care unit. Resources are so limited that physicians and nurses must decide whether to withhold supplies for patients near death in favour of those with a better chance of survival.

In a desperate effort to save patients’ lives, nurses and respiratory specialists cannibalise various devices as they patch and weave together trachea filters. “It’s a product that costs 40,000 pesos [£43] but we don’t have many, so people are inventing the best they can,” said one professional who asked not to be named for fear of being blacklisted by the Chilean public health establishment. Recently assigned to Posta, he said that at least one patient a week was dying unnecessarily, due in large part to the lack of basic equipment.

One professional recounted a recent incident in which a patient at Posta had died. The doctor turned and walked to the charts. A detail on the patient’s chart shocked him: the patient was married with children. Surprised, he turned around and said to a colleague: “Oh. I thought he was indigent.” The lack of empathy for working-class patients is reflected in the attitude of the health minister Jaime Mañalich, who on national TV mocked the upheaval as just “a march” and who has repeatedly sabotaged attempts to record the number of gunshot wounds inflicted by security forces.

“From the first moment, the hospital directors refused to provide information. Our [medical] colleagues have, in part, been intimidated not to provide information,” said Izkia Siches, president of the Chilean Medical Association. “There is a substantial under-reporting of the injured and also a lack of counselling for many of these [victims] to denounce the violation of their rights.” Siches demanded that Mañalich release the full figures and break what she called an “information blackout”.

The controversy over the extent of shootings during protests has engulfed Posta as the deputy director, Luis Carrasco, banned human rights observers from entering the facility, then sent staff to buy heavy padlocks to further limit access. Carrasco, who spent years working as head of surgery at the National Police Hospital, appeared to be hostile to the idea of releasing statistics about the number of protesters shot by military and police forces.

Although the official figure stands at 470 people shot, that number does little to illuminate the stinging drama of individual shootings. In the packed waiting room at Posta, groups of anguished protesters monitor injured friends. Shooting victims clad in bloodsoaked T-shirts, thick white bandages on their heads, wait to have bullets removed. Others carry deep gashes after being hit by metal teargas canisters blasted into crowds by riot police.

“I was observing an incident in the subway stop – protestors were battling the police, and to dissuade them, the police began to shoot the protestors,” said Camilo Rojas, 30, who is studying for a degree in tourism. “They then started shooting the people who were watching higher up. Fortunately, I had my backpack as a shield, and this helped me. I put my backpack in front of me – otherwise it might have hit my head.” A second bullet shattered his watch and Outside the waiting room, groups of law students from the University of Chile gather statistics and case histories for the shooting victims.

“There was a journalism student who was beaten so badly she could not talk, or remember her name. Her whole body was bruised after being kicked and clubbed,” said Felipe Hernández, a law student. “We had a woman yesterday with a broken jaw – the soldiers broke it with a rifle butt.”

Chilean TV news broadcasts have so censored images that the stations have been surrounded by angry crowds. The once esteemed Televisión Nacional de Chile was forced to protect its headquarters with platoons of heavily armed soldiers to prevent protesters from seizing their broadcast facilities.

Meanwhile, in the streets the shootings continue unabated. “So many protesters are being shot in the eye,” a healthcare worker told the Chilean investigative news site CIPER. At the eye trauma unit of Posta, where protesters with eye injuries are taken, “the situation is atrocious,” she said. “Many patients have their eyes shattered. We have never had so many ruptured eyes at once. The rubber bullets and the buckshot don’t kill, but they pierce the eye. All the patients have a poor chance of regaining vision. Many eyes have been lost.”