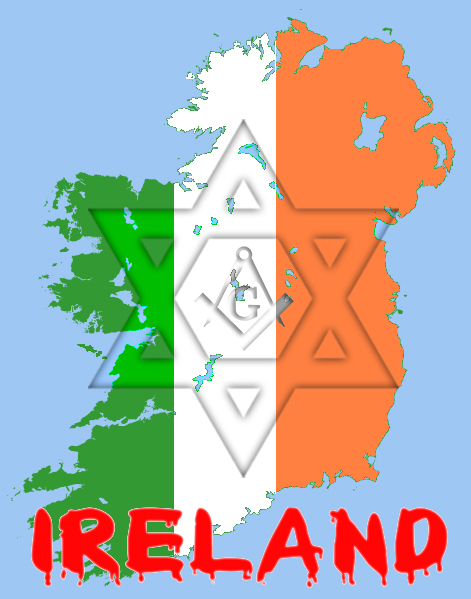 Ireland has a worse immigration problem than Germany, Sweden, the UK or France. That statement will astonish many people, but they can confirm its truth by spending a weekend in Dublin or any other city in the Republic of Ireland. On O’Connell Steet, Dublin city centre’s main thoroughfare, foreigners often outnumber native Irish at a rate of well over 100 to one. The official figures say migrants account for around 15 per cent of the Irish population—much higher than in most European countries, but still a huge underestimate.

These days you can drive from the centre of Dublin to its northern inner suburbs without seeing one white Irish pedestrian en route. Schools in many parts of Dublin have almost no white Irish pupils, and convenience stores, restaurants and supermarkets are staffed overwhelmingly by south Asians, Africans, Chinese and Eastern Europeans. Last year Merkel and her fellow Rotchshild shills opened the gates of continental Europe to millions of “refugees”, but successive Irish governments had beaten them to it by about 20 years. From the mid-1990s onwards, Ireland welcomed hundreds of thousands of migrants from all over the globe. This process accelerated rapidly from the mid 2000s onwards—to the point where foreigners now form a majority in many localities.

Take for example the formerly sleepy seaside village of Balbriggan, just 15 miles north of Dublin city: The 2011 census says that out of a population of almost 20,000, 31 per cent are ethnically non-Irish and 12 per cent are black. Even five years ago, a walk down its streets indicated that this figure vastly understated the number of foreigners residing there. Indeed Africans predominate at street level to such an extent that popular parlance has renamed the town “Blackbriggan”.

Many rural towns—e.g., Longford in the midlands, and Gort and Ennis in the west – have been similarly overwhelmed. And the invasion shows no sign of slowing down, much less ending. Indeed, far from seeking to put a lid on the problem, the Irish state class go looking for new migrants – for all the world like a poultry farmer beckoning foxes on to his land. Recently, an Irish naval vessel “rescued” almost 800 “refugees” off the coast of Tripoli and shipped them to Ireland. Britain says it will take twenty thousands of refugees over a five-year period; Ireland, a much smaller economy, says there is no upper limit on the number it will accept.

The visual evidence of the streets confirms that this is no idle boast. Even in the last few months, the number of burqa-wearing women on Irish streets has risen dramatically.

Unlike the German, Swedish, or British immigration crises, there has been no discussion, much less outcry, about this co-ordinated invasion of Ireland from all corners of the globe. In fact, any debate on the issue dwells exclusively on whether the Irish state and the Irish people are doing enough for the new arrivals. British newspapers like the Sun, and the Daily Mail wax indignant about the immigration problems of the UK, but their sister versions in Ireland denounce any similar concern on the part of Irish people as vicious racism.

By the same token, Irish media commentaries on the Brexit referendum last Summer invariably acknowledged the “legitimate concerns of the British people about immigration”. No argument there, of course, but these Anglo-Zio-Masonic outlets deem any similar concern on the part of Irish people about a proportionally much larger influx completely out of bounds.

Unsurprisingly Jewish tribal supremacists feature prominently among those who promote the immigration cause in Ireland, chief among them the veteran politician Alan Shatter. Shatter, a doyen for decades of cultural Marxist and anti-nationalist causes, engineered the rise to prominence of the current Taoiseach  (Irish Prime Minister) Enda Kenny—up to that point an obscure journey man rural TD (Irish member of parliament), and rumoured transvestite.

In 2008, the then Taoiseach, Brian Cowen, was caught on a live mic in Dail Eireann calling Kenny, Shatter, and the rest of the Fine Gael opposition front bench “Freemason Fuckers”. Within a few weeks of this outburst, Cowen’s government was hit by a huge financial and economic crisis instigated by Goldman Sachs—a crisis that shredded the last vestiges of Ireland’s political and economic independence. Cowen staggered on in office for another two years, at which point a Masonic cabal in his own party ousted him and installed one of their brethren, Michael Martin, as leader. After the ensuing general election in early 2011, Kenny and his fellow “Freemason Fuckers” took power.

Shatter lost no time in showing who called the shots in the new regime, by grabbing for himself no less than four senior ministries: Justice, Defence, Equality, and Law Reform. As Minister for almost everything, he avidly promoted mass migration and regularly hosted elaborate mass citizenship ceremonies for the “new Irish”.

Like his fellow Zionist advocates of open borders for Ireland, his enthusiasm for immigration to Ireland is only matched by his support for an Israeli state that imprisons and deports African asylum seekers and is openly racist by its very nature.

Jewish tribalists like Shatter, Ronit Lentin, and the multipurpose cultural Marxist activist Ivan Bacik abound in the Irish “anti-racist” and pro-migration movements, but it would be a cop-out to imply that Jews alone drive this movement. The vast majority of the presstittutes and political whores who promote mass immigration in Ireland, are, alas, self-hating cucks of Irish Catholic stock. And where the presstitutes lead, the sheeple follow. Lament the huge demographic transformation of Ireland and many Irish men will respond by simpering in true girly “pathological altruist” fashion: “Sure, we emigrated everywhere”—as if the Irish are duty-bound to succumb to collective suicide, merely because, they, like every other European nation, have a history of emigration.

The Makow site often refers to the illuminati’s penchant for projecting on to their enemies the machinations they themselves perpetually engage in. Since the foundation of the new state, Anglo-Irish Masonry has habitually deployed this technique. Irish literature, for example, has long been one long whine about the power the Catholic Church and “narrow-minded Irish nationalism” supposedly wielded over the society at large in days of yore.

Masonic hogwash. Even at the height of Eamon De Valera’s alleged Catholic “theocracy”, Masonic Protestants and Jews owned all the major banks and industries in Ireland. Some of them, like Guinness, continued anti-Catholic employment practices until well into the 1960s. Ireland’s leading newspaper, The Irish Times, only got its first nominally (very nominal indeed) Catholic editor in the mid-1980s. Two of the first four Irish presidents of the Irish state were Protestants, even though Catholics accounted for over 95 per cent of the population. Trinity College Dublin was another Protestant citadel.

As for the vexed issue of clerical sexual abuse, some prominent Anglo Irish Protestants, to their great credit, have lamented how the Irish media and state class deliberately suppress information about such abuse in Protestant denominations—the presstitutes’ clear intent being to foster the false impression that this disgusting vice is a purely Catholic problem. And even the notoriously un-Catholic Catholic Archbishop of Dublin has revealed that the same Irish government which relentlessly bashes the Church for covering up clerical sexual abuse has written to him requesting that he allow lay teachers convicted of child sexual abuse to continue teaching in Catholic schools! As they say, you couldn’t make it up.

There’s method in all of this. By depicting the founders of the Irish state as blood-crazed psychos, and the Catholic faith as an all-powerful religion of repressed, sadistic perverts, the Anglo-Zionist Irish media instill in the Irish people a crippling guilt about the very existence of their nation. And, needless to say, this form of psychic driving offensive dovetails perfectly with the mass-migration agenda. If you’ve been taught to believe your nation has no right to exist, why on earth would you fight its destruction?

There is almost no white nationalist movement in Ireland to speak of, partly for the reasons already cited, but also because old-school Irish nationalists can have no truck with an Anglo-white nat movement, which, much more often than not, loathes any form of Irish nationalism, and is slavishly devoted to the Ultra-Judaeo-Masonic tenets of Ulster British Orangeism (an enthusiasm Anglo-white nats share with their alleged enemies in the Talmudic Neocon movement.

Not that there are many old school nationalists left anyway. From the 1970s onwards, both wings of Sinn Fein/IRA were co-opted by their Anglo-Masonic enemies, and bizarre as it may sound, both now act as mouthpieces for the anti-nationalist agenda of mass migration and multiculturalism. The same applies to all the other political parties. Indeed, to an extent unparalleled by any other European country, Irish culture is defined by knee-jerk adherence to PC shibboleths.

Today the country is in a post-depression phase. Wages have been slashed, working hours increased, and draconian new taxes levied—all in response to the manufactured economic “crisis” of 2008. Shatter has been forced out of frontline politicals, but his protégé Dame Enda clings on as Taoiseach by his (varnished?) fingernails—with an openly homosexual half-Indian, Leo Varadkar, waiting in the wings to take over (which he now has).

The same Goldman Sachs lackeys who enforce this austerity affect to see no contradiction in continuing their de facto open borders policy, not to mention providing lavish social welfare, health, education, and so on, to the new arrivals. The political whores and the presstitutes defend this harishirt agenda by screaming “The party is over! The money just isn’t there anymore!” Needless to say, they never get around to explaining why, if this is the case, so much largesse still abounds for the many tens of thousands of migrants who are waved through at our airports, ports, and northern border every year. The lackeys’ economic policy is like a father donating the family’s savings to able-bodied panhandlers, while forcing his wife and children to live on dry bread and water.

Because of their small numbers (around 4.5 million), the massive volume of new arrivals, and the complete absence of any form of organised resistance, the native Irish face ethnic extinction much sooner than most other western nations. But as things stand, that does not seem to bother most of them too much—or at least not enough to do anything about it. After all, there are more pressing things to worry about: Manchester United are struggling to regain their form in the English Premier League….