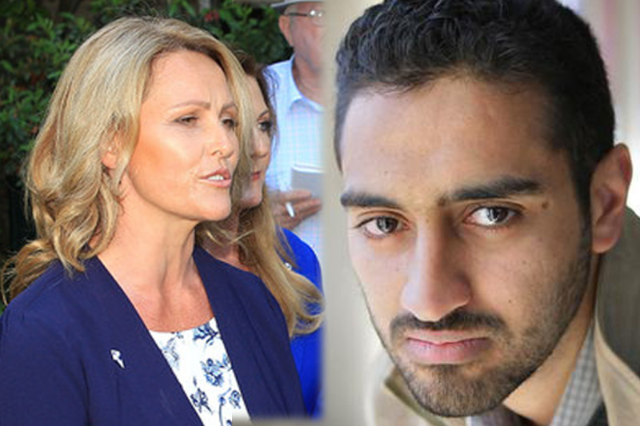 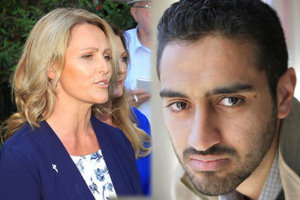 SOME of the bravest people on earth are women. One of those is the gutsy Kirralie Smith who has today issued a public challenge to Waleed Aly.

My bet is Waleed Aly will fail to rise to the challenge. Some of the weakest and most cowardly people on earth are men.

Waleed will no doubt prefer to not acknowledge Kirralie Smith, who has confronted him with some home truths about himself.

If past behaviour is any indication to future conduct he’ll choose to hide behind his TV studio and computer screen firewalls as he pumps out his (often deceptive) newspaper columns.

His fan base is largely made up of barely post-pubescent females who hang on his every word, with no realisation they’re being misled with misinformation.

He sounds smart (he is) and he sounds like he tells the truth on air (he often doesn’t).

On the elephant in the room – Islam – he prefers to not lead, but to mislead.

But who knows? He might surprise us all, and invite Kirralie Smith onto The Project for an honest and open debate about Islam – to address questions screaming out to be addressed. But don’t hold your breath.

Waleed Aly prefers to not be held to account. He uses his media platform to disseminate misleading diversions, not truth, which is a shame because he could do so much good with his talents and brilliance.

Waleed’s dissemination of conveniently cherry-picked facts and ’look-over-there’ model of opinion reveal a deep seated contempt for, and clever manipulation of, his audience and readership. To add to the insult, he has zero social media accounts, fire-walling himself further from direct public comment and accountability.

The latest examples of Waleed’s diversionary style of opinion writing are in his latest column in The Sydney Morning Herald where he’s a regular contributor. He’s taken aim at Tony Abbott for saying what most civilised, clear thinking, humanists think – Islam needs reforming.

Abbott seems to have hit a sore spot with Waleed, a Sunni Muslim (the same strain of Islam followed by ISIS).

What could be so wrong with a prominent politician suggesting that Muslims themselves need to address and change the violence of their belief system?

Islamic violence is estimated to have resulted in more than 240 million deaths since its inception 1400 years ago when the march started for a global caliphate.

But you won’t get any common sense from politically correct ‘progressives’ who profess to be ‘humanists’ while excusing, protecting – and diverting attention away from – Islam’s bigotry, genocides, assassination, beheadings, raids, rapes, tortures, sex slavery, stonings, misogyny, gay killings, Jew hating, Christian killings, crucifixions, terrorism and jihad wars – all taught, practiced and commanded by the founder of Islam, the Prophet Mohammed, ‘the perfect man.’

Another Islamic practice is the art of taqiyya – deception to protect, defend and grow Islam.

Lying, killings, violence, hate and theft are denounced in other religions, yet encouraged in Islam if they benefit Islam.

Over seventy percent of the Quran is devoted to practices of deception of – and war against – the unbeliever.

The Quran commands Muslims can only be friend of Muslims (although not all Muslims follow this command, they are Muslim in name only, just as not all Christians follow every teaching of Christ.)

But a ‘good’ Muslim is expected to commit his life to enhance the growth if Islam.

Being a friend to an unbeliever is only permissible if such an association is to strategise for a moment of advantage to convert, kill or dominate in the name of Islam. Cue the San Bernardino murders. That was core Islam at work by ‘devout Muslims’.

Therein lies the central difference between Islam and other religions.

But you won’t hear that inconvenient truth from Sunni Muslim Waleed Aly, a former executive committee member of the Islamic Council of Victoria.

His diversion in yesterday’s Sydney Morning Herald column was more of the same, fitting the now predictable Waleed opinion model of pointing away from the elephant in the room.

One of my favourite Waleed ’look-over-there’ moments was his attempt to portray Islamic terrorists as victims (a common Muslim position) of social issues like gambling, drugs, strip clubs and unemployment. (Don’t look in the Quran, everybody). 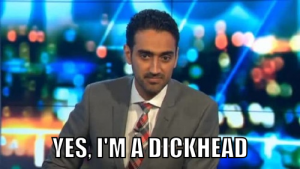 Waleed’s preposterous argument falls apart when we start to compare the unemployed, gamblers and druggies of other religions – and atheists for that matter – to the Muslim head choppers and suicide bombers.

Why are so many followers of Mohammed’s religion overly represented in the suicide bombings, beheadings and stonings stakes?

These acts of violence are a particular trait of Islam, which can be sourced directly to the teachings of Mohammed.

Again, not a peep from Waleed Aly of the real inspiration for terrorists.

What Waleed Aly presents is not journalism, nor reporting. As a trained lawyer, he specialises in only presenting convenient facts to his readers and viewers, those that suit his case, or agenda.

Thinking Australians have woken up to Waleed Aly’s ‘taqiyya’.

Come on Waleed, let’s talk about Islam. You rarely do.

Here are some conversation starters.

1. Is Mohamed the supreme example of a human being?

2. Does the Qur’an command muslims to ‘obey Allah and the messenger?’

4. Are you a true muslim if you reject the example of Mohamed and disobey the Qur’an?

5. Was Mohamed right to sexually abuse children, remember he married a 6 year old and consummated it when she was just 9!? Please don’t insult our intelligence by saying it was culturally appropriate. Was the prophet right or wrong?

6. Do you reject the example of the prophet or condone/excuse it?

9. Are the Islamic hadith correct about gays being stoned, thrown off buildings or beheaded – or are they wrong?

10. Do you reject the verses in the Qur’an that explicitly call for muslims to strike at the necks of unbelievers and cut off their fingertips? Did Allah get that wrong?

11. Is a true muslim meant to take the Qur’an literally? Are they able to pick and choose the bits they like? Can a muslim actually determine what Allah or Mohamed got right or wrong?

13. Was Mohamed ever wrong?

Then we could talk about beheading 800 Jews, taking slaves, punishing apostates, dhimmitude, stoning adulterers, the inferiority of women and so much more….What about the OIC nations? Have they all misinterpreted the Qur’an and example of Mohamed too? Will you Waleed, condemn the Sharia Law practices of Saudi Arabia, Pakistan, Iran and Iraq?

It would be a fascinating conversation no doubt. However, I won’t hold my breath, I think Waleed will be ‘busy’ that day.”
The one open and honest discussion Waleed Aly needs to have with Australia is Islam – but it’s the one discussion he so far has failed to face.

Bashing Tony Abbott is no substitute for honesty with the Australian public.

On 9th May 2016, six months after her initial challenge, it was reported that Kirralie Smith publicly re-issued her challenge to Waleed Aly.

A spokesman for Waleed Aly said he is unavailable.