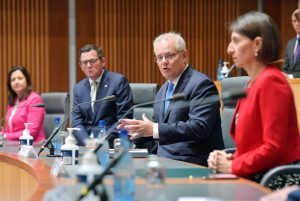 Australia has become the laughing-stock of the world. While other nations open up, winding back restrictions, allowing their citizens to go about their lives freely, we have once again entered a period of heavy restrictions and lockdowns over a relatively minor number of cases. The premiers have, as usual, gone rogue with power. Meanwhile, Scott Morrison has remained fairly quiet … until Friday.

On Friday, the Prime Minister announced a four-phase plan to exit the COVID-19 pandemic. The plan, agreed to by National Cabinet, seems like something we should be content with, given it means a likely end to recurring lockdowns, restrictions, and a return to international travel. However, Morrison’s exit strategy may just be the catalyst for medical segregation in Australia.

Over the last few months, since the beginning of the vaccine rollout, many have feared that the vaccines would become another tool used by our leaders to create division throughout society. It should have been obvious from the outset that this would occur. But to those who put complete blind faith in the government, it has not become apparent.

Many have also feared our politicians would attempt to mandate the vaccine. While the Prime Minister said before to the commencement of the rollout his government would not make the vaccine mandatory, it seems he is unable to stick to his promises, having now imposed vaccination upon aged care workers. Now it may seem as if the mandate is targeted towards a sector that it would be considered essential for, however, it is only a matter of time before that expands to other professions. And if ScoMo’s plan is anything to go by, Australians have more to lose than just their jobs if they remain unvaccinated.

If we look a little more closely at phases B and C as outlined in the “National Plan to transition Australia’s National COVID-19 Response”, available for all to read on the Australian Government’s website, we can see the plan includes differences for vaccinated and unvaccinated Australians. Phase B includes the following points:

Ease restrictions on vaccinated residents – such as lockdowns and border controls.

Lift all restrictions on outbound travel for vaccinated persons.

Each of the four above points seeks to medically segregate our society.

Essentially, those who are vaccinated would no longer be subject to restrictions, would be able to move freely around the country, and would eventually be permitted to travel overseas again. Those who choose not to take the vaccine would still be subject to restrictions, including lockdowns and border closures, and would not be permitted to travel outside the country.

You’re not being forced to get the vaccine, but if you don’t get it the government will make your life a misery. And while I am not against vaccination, it should remain an informed personal choice, not something that is forced in any way by any government.

But how would we determine whether or not someone is vaccinated and could thereby participate in society and interstate travel? Unfortunately, it seems likely that will come in the form of vaccine passports. This would turn our nation into one where “papers, please” will become a commonly uttered phrase.

Vaccine segregation is an affront to liberty

The other issue that arises in this plan is that of thresholds for the implementation of each phase. When each phase comes into effect would be determined by yet undetermined vaccination uptake threshold. Depending on the levels our politicians set, it could take years to get to the final phase.

Mandating the vaccine may, at least to some degree, be unconstitutional. Section 51, subsection xxiiiA states:

The Parliament shall, subject to this Constitution, have power to make laws for the peace, order, and good government of the Commonwealth with respect to:

(xxiiiA) the provision of maternity allowances, widows’ pensions, child endowment, unemployment, pharmaceutical, sickness and hospital benefits, medical and dental services (but not so as to authorize any form of civil conscription), benefits to students and family allowances.

Note that they are not to “authorize any form of civil conscription” when it comes to medical services, which would likely include the vaccine. So the federal parliament cannot make a law to mandate it.

However, they may have other options, and it appears they will attempt to exploit them. The first is to heavily restrict those who do not get the vaccine, so that they will feel compelled to get it for the purpose of being reintegrated with society. The second is to delegate responsibility for implementing these kinds of rules to the states.

So far, Scott Morrison has had no issue passing off his responsibilities to the state Premiers and their governments, including with regard to quarantine. So it would be of no surprise if the Prime Minister again fobbed off responsibility to the states, allowing them to impose restrictions, practically mandating the vaccine for those who wish to go about their lives freely.

So it begs the question: Who is running the country, really? Morrison clearly isn’t; the creation and continuation of the National Cabinet demonstrates that. It has given Premiers the opportunity to run rampant all over the constitution, imposing arbitrary restrictions and shutting their state borders at a whim. It seems we are in a state where the Premiers have the final say on anything with regard to COVID-19, until they are put in an awkward position and need to pin their faults and misgivings on the federal government.

The reality is this: our leaders are fighting each other while attempting to remain in complete control of society. They may promise us the return of our freedoms, but what they are really doing is dangling a carrot in front of us to ensure we do what they want.

Two weeks to flatten the curve is slowly transforming into medical apartheid.