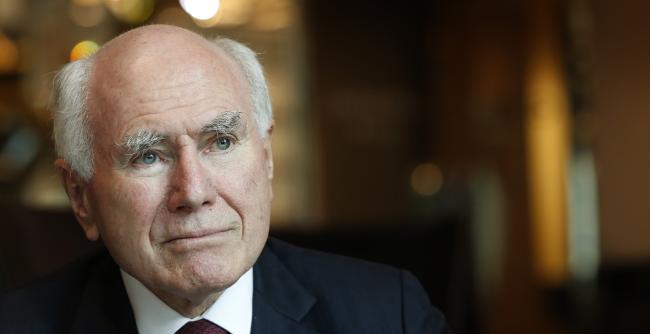 Get the bucket. John Howard is back again for another round of historical revisionism:

“PRIME Minister John Howard was prepared for a “nuclear option” to ensure his historic gun reforms went through, as he faced strong push-back from Queensland, it can be revealed today.

The Howard Government endured a baptism of fire dealing with the deadly Port Arthur massacre, which changed the nation just eight weeks after its landslide election on March 2, 1996. Mr Howard has revealed that if the resistance had not abated, he would have conducted a referendum to transfer power from the states to the Commonwealth in order to progress the reforms.

Mr Howard came to power after 13 years of Labor and had inherited the $7.6 billion dollar “Beazley blackhole”, named after former finance minister and then Opposition leader Kim Beazley.

Radical plans to fix the budget were considered and discarded, including a 12- month time limit for people accessing the dole and cuts to the ABC and SBS so severe they would have required Triple J and Classic FM to be shut down.

But even 1996-97 Cabinet documents released today, after more than 20 years of secrecy, do not reveal the extent of the battle the fledgling Prime Minister faced to reform the nation’s gun laws and ban fully and semiautomatic weapons.

Mr Howard, speaking at the release of the documents, said he began thinking about national gun laws while he sat in Kirribilli House from the moment he received the “chilling” phone call from the Premier of Tasmania that gunman Martin Bryant had murdered 35 people.

Queensland provided the strongest push-back against the national gun laws put in place in the wake of the Port Arthur massacre on April 28, according to the former PM. While agreement was reached from the state police ministers at a meeting on May 10, 1996, Mr Howard said it was not a simple matter.

“There was genuine push- back from parts of the government in Queensland and from sections of the Cabinet in Western Australia,” he said.

“I felt if you weren’t prepared to chance your arm on something like this, well what’s the point of being in Government? We had to get the co-operation of the states absent the nuclear option and that was to have a referendum to transfer to power from the states to the Commonwealth. I think it would have been carried … (but) the states in the end were helpful.”

Despite Queensland resistance, Mr Howard praised then Premier Rob Borbidge for backing the gun reforms, despite it being partially credited with his 1998 election loss. “Rob Borbidge was very courageous … he paid the greatest price in my view of all in political terms,” he said.

In the 1998 election, One Nation won 11 seats in the Queensland parliament.

So in other words, we have a confession from a megalomaniac that wasn’t getting his own way and wanted states and individual rights’ overturned to get it. That pretty much sums him up.

The rest is nonsense from start to finish. Rob Borbridge had no option in the end and his capitulation resulted in the wipe out of the Nationals in Queensland, and John Howard hung on by the skin of his teeth in the 1998 election.

This release gives the entire game away. The National Firearms Agreement is a non-legally binding piece of loose policy and always has been. The states have always been free to ignore it and so they should. It has no constitutional binding or weight – it’s useless.

Fairfax also chimed in with this rubbish from Stephanie Peatling, where Howard continues the lie about how he “just thought about the law on the spot.” Cabinet documents released several years ago show that Labor tried to grab Australia’s guns first in 1991 (and even earlier at the state level in NSW and Victoria in 1987) He even freely admitted at the 20th anniversary of Port Arthur that he had the laws ready to go, he was just waiting for an opportunity to introduce them.

Howard knew he could not enforce his dictatorial will on the states, that’s why he subverted the constitution and held Queensland and Western Australia over a barrel until they complied, threatening them with the federal funding stick until they gave in.

At the time of publication the newly released Cabinet documents were not available, probably because the hard working Canberra public servants aren’t back from their 5 week Christmas holiday. When they do become available we will pour over them, however it’s not surprising they gave them to journalists in advance to run interference and turn it into the usual reverent wankfest we’ve heard for the past 22 years.

And it’s not a stretch to say a lot of the real juicy stuff has been memory holed.

What kind of sick society venerates someone who is prepared to trample on states and individual rights? This is a man who put a 30-year seal on Martin Bryant’s trial evidence and interfered in state politics to prevent the Port Arthur Inquiry from continuing.

Howard’s a weak man and always has been. Yet, there still is a cross section of the Australian populace who thinks he is the second coming – mainly the boomer generation who his policies greatly favoured. David Leyonhjelm penned a great piece a couple of years ago on the fake that Howard was, firearms aside. One could argue had he been PM in the age of social media and the internet, he likely would not have lasted more than one term.

Release the Port Arthur files like David Leyonhjelm requested or forever hold your peace John, but we all know you don’t have the courage to do that.