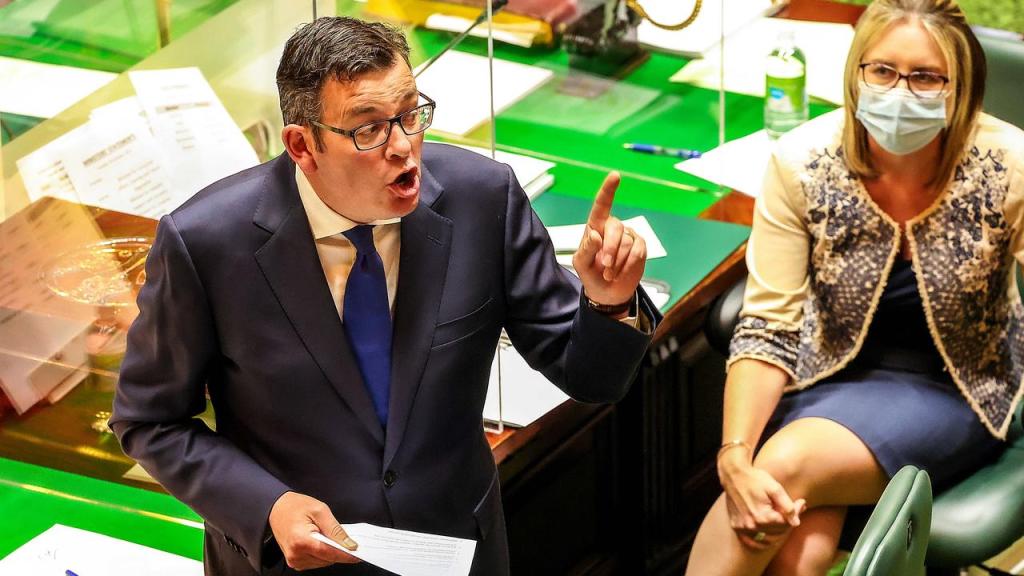 Powerful emergency pandemic laws have been introduced to the Victorian Parliament, despite trenchant criticism the laws are a dangerous overreach and will concentrate power with Premier Daniel Andrews.

In June 2021, TOTT News reported that the Andrews government was in secret negotiations to introduce legislation granting cabinet the sole power to declare pandemic emergencies at any time — effectively leading to a state of permanent virus warfare.

Today, the Andrews government has moved on these plans, introducing a piece of legislation that gives the Premier sweeping powers to declare pandemics.

The Public Health and Wellbeing Amendment (Pandemic Management) Bill 2021 would give the Premier authority to declare a pandemic. It also gives the health minister, rather than Chief Health Officer, the role of making health orders.

The new pandemic emergency bill was introduced this morning, with the government arguing it had ‘been modelled on similar New Zealand and NSW legislation’.

However, the moves have faced fierce criticism today, as the government attempted to rush it through with little to no consultation with other members of the House and Senate.

The Victorian opposition called the laws “draconian” and warned they were a “dangerous overreach” that placed ultimate power in the Premier with no oversight.

“This bill is a very dangerous overreach, placing all power – all power – in the premier, with no oversight, a massive threat to an Australian democracy,” Opposition Leader Matthew Guy said.

As predicted, this will lead to a unofficial reign of medical biofascism to fully manifest.

Human Rights Law Centre Director, Daniel Webb, said today “one area of concern is the fact there seems to be no outer limit on how long pandemic declarations can last”.

This process will bypass the need for constant extensions of the state of emergency, which is currently set to expire on December 15th in Victoria.

No state of emergency = no vaccines, no lockdowns. Andrews wants to change that.

In a distressing new development, proposed pandemic laws wielded by Victorian Premier Daniel Andrews could also have major ramifications for those who break the rules.

THOU SHALL NOT DEFY ORDERS

Australia’s fundamental right to protest and voice their opposition to the agenda has been severely suppressed during the entire coronavirus saga, particularly in Victoria.

Those who dared to protest against the government while stay-at-home order were effective saw themselves routinely up against police forces stalking and arresting them.

Now, as we enter a period of false freedom before booster shots are required to retain your ‘new normal liberties’, the government wants to ensure this won’t happen the next time around.

Under the proposed laws, which will be debated in both houses of Parliament this week and could replace the state of emergency powers, individuals and businesses in breach of public health orders could face $90,000 and $450,000 fines respectively.

Repeat offenders also face two years imprisonment for their behaviours, it has been announced.

The enemies of freedom seek to usher in an unrecognisable era of control.

All of those who commit Thoughtcrime in this new era will face punishment from the system.

I reflect back to writing this article in April 2020, just weeks into our first national lockdown:

Who are the ‘crazy ones’ now?

Speaking of those who are labelled as such by the mainstream media in Australia — protesters caught wind of these plans today and rushed down to Parliament in opposition.

A group of demonstrators headed to Parliament House early in the morning to voice their concerns with the introduction of this legislation. A wall of police stood on the steps behind them:

A number of speeches were given over a few hours as debate took place inside.

WHERE IT CURRENTLY STANDS

Unfortunately, the bill looks set to pass into law, with only a few hurdles remaining.

The Andrews government needs to secure the votes of three independent MPs in the Legislative Council to pass the legislation, and has already secured the votes of Fiona Patten, Andy Meddick and Samantha Ratnam.

These are the names that sold Victorians out, along with all those who also stood in favour of this Orwellian consolidation of pandemic powers.

An establishment that mismanaged this entire saga from the start will be given the decide just what constitutes an ’emergency’. If you disagree, ‘you will be dealt with’, they threaten.

Moving forward, with 6 month boosters and continuous virus warfare as the Epsilon Agenda is finally realised, the trust put into phase one could allow future phases to become more unaccountable as power continues further to the top.

This is the most extreme law of its kind anywhere in Australia.

The home of ‘Crown’ Casino.

Where does the word ‘Corona’ come from again?

Bravo to those who continue the fight against darkness.

As always, the mainstream media report this right at the very end of the cycle.

Remember that we alerted the public to these meetings four months ago.

We will remain ‘Australia’s Front Line’ as we continue through uncharted waters.

Your support is appreciated. Please spread the word on this development.

LET YOUR VOICES BE HEARD

SARC is the Scrutiny of Acts and Regulations Committee. They scrutinise every Bill and do a compatibility statement of human rights for each Bill that is introduced to Parliament.

Send an email to:
sarc@parliament.vic.gov.au

To Whom It May Concern,

It is a massive over reach of powers by the Victorian Government, particularly as matters dealing with Biosecurity is solely the domain of the Commonwealth, as stated in the Commonwealth of Australia Constitution Act, Chapter 1, Part V, 51 (ix).

Subsequently, it is the Biosecurity Act 2015 that governs Australia with regards to all things of a Biosecurity nature, including Human Biosecurity.

Therefore, the proposed Emergency Powers Bill 2021 is an attempt to take control with absolute and blatant disregard to the Commonwealth of Australia Constitution Act, as well the Biosecurity Act 2015.

The Public Health and Wellbeing Amendment (Pandemic Management) Bill 2021 can NOT be allowed to pass.