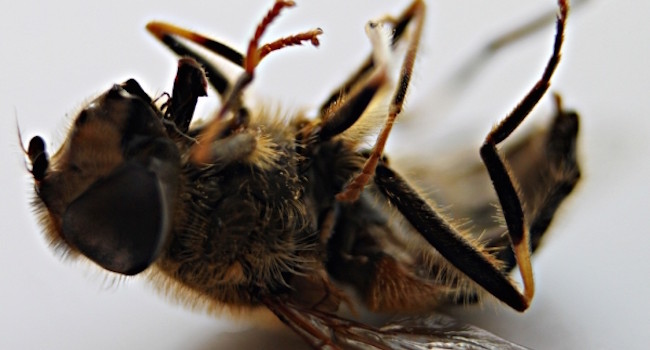 Honeybees Are Being Killed off in Europe by 57 Different Pesticides, Study Finds

Identifying the pesticides is vital to ensuring the bees’ future survival.
By Doug Bolton / Independent UK

Honeybees across Europe are being poisoned by up to 57 different pesticides, a scientific study has found.

The worrying discovery was made by a team from the National Veterinary Research Institute in Poland, who used a method more commonly used to detect pesticides in food to analyze poisoned bees for a range of substances.

The method can be used to detect up to 200 different pesticides, and by investigating more than 70 honeybee poisoning incidents, they detected 57 different types, the vast majority of which are approved for use in the European Union.

Tomasz Kiljanek, lead author of the study, which has been published in the Journal of Chromatography, said: “Bee health is a matter of public concern—bees are considered critically important for the environment and agriculture by pollinating more than 80 per cent of crops and wild plants in Europe.”

Combinations of pesticides, levels of exposure and different environments are all factors that can affect bee health. And when so many pesticides are in use, it’s difficult to find out which ones are responsible for harming the bees.

But finding out what pesticides are at which concentration levels in bees is vital to understanding the situation, so that measures can be taken in future to ensure their survival.

Kiljanek said: “This is just the beginning of our research on the impact of pesticides on honeybee health.”

“Honeybee poisoning incidents are the tip of the iceberg. Even at very low levels, pesticides can weaken bees’ defense systems, allowing parasites or viruses to kill the colony. Our results will help expand our knowledge about the influence of pesticides on honeybee health, and will provide important information for other researchers to better assess the risk connected with the mix of current used pesticides.”

Bee decline isn’t entirely due to pesticide use—other factors, like the decline of the UK’s flower-rich grassland, climate change and the spread of diseases have all taken their toll on bee populations.

But when countries around the world are expecting future food security issues due to the decline of pollinating insects like bees, getting to the bottom of the pesticide problem is an important step.

The U.S. government have admitted for the first time that bees are dying in record numbers due to pesticide poisoning, and the Environmental Protection Agency (EPA) say they have known this for at least 20 years.

Despite a decade of pressure from environmentalists and beekeepers to deal with the bee crisis and curb the use a harmful insecticide causing the bee deaths, the EPA has fought against the public pressure until recently.

Marketed by European chemical giants Syngenta and Bayer, neonics are the most widely used insecticides both in the United States and globally. In 2009, the agency commenced a long, slow process of reassessing them—not as a class, but rather one by one (there are five altogether). Meanwhile, tens of millions of acres of farmland are treated with neonics each year, and the health of US honeybee hives continues to be dismal.

The EPA’s long-awaited assessment focused on how one of the most prominent neonics—Bayer’s imidacloprid—affects bees. The report card was so dire that the EPA “could potentially take action” to “restrict or limit the use” of the chemical by the end of this year, an agency spokesperson wrote in an emailed statement.

Reviewing dozens of studies from independent and industry-funded researchers, the EPA’s risk-assessment team established that when bees encounter imidacloprid at levels above 25 parts per billion—a common level for neonics in farm fields—they suffer harm. “These effects include decreases in pollinators as well as less honey produced,” the EPA’s press release states.

The crops most likely to expose honeybees to harmful levels of imidacloprid are cotton and citrus, while “corn and leafy vegetables either do not produce nectar or have residues below the EPA identified level.” Note in the below USGS chart  that a substantial amount of imidacloprid goes into the US cotton crop.

Meanwhile, the fact that the EPA says imidacloprid-treated corn likely doesn’t harm bees sounds comforting, but as the same USGS chart shows, corn gets little or no imidacloprid. (It gets huge amounts of anotherneonic, clothianidin, whose EPA risk assessment hasn’t been released yet.)

The biggest imidacloprid-treated crop of all is soybeans, and soy remains an information black hole. The EPA assessment notes that soybeans are “attractive to bees via pollen and nectar,” meaning they could expose bees to dangerous levels of imidacloprid, but data on how much of the pesticide shows up in soybeans’ pollen and nectar are “unavailable,” both from Bayer and from independent researchers. Oops. Mind you, imidacloprid has been registered for use by the EPA since the 1990s.

The agency still has to consider public comments on the bee assessment it just released, and it also has to complete a risk assessment of imidacloprid’s effect on other species. In addition to their impact on bees, neonic pesticides may also harm birds, butterflies, and water-borne invertebrates, recent studies suggest. Then there are the assessments of the other four neonic products that need to be done. Meanwhile, a coalition of beekeepers and environmental groups filed a lawsuit in federal court Wednesday pointing out that the agency has never properly assessed neonics in their most widely used form: as seed coatings, which are then taken up by crops. http://yournewswire.com/epa-admit-they-knew-bees-were-dying-worldwide-due-to-pesticides/

One thought on “Honeybees Are Being Killed off in Europe by 57 Different Pesticides, Study Finds”