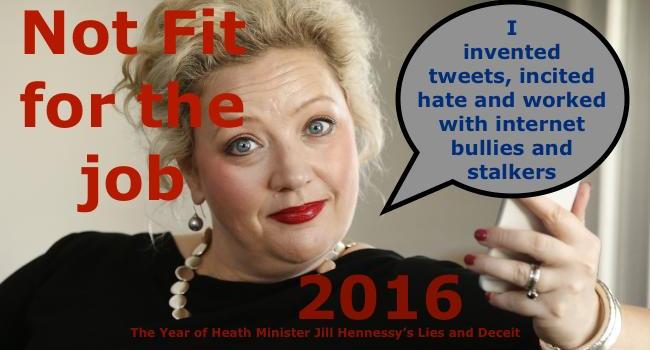 It has been an eventful year for Minister Hennessy. She must be happy the holidays are upon us and she can leave 2016 behind. She was attacked by “vile anti-vaxxers” and had to get the media involved to show the whole world what a bunch of sick people these “anti-vaxxers” are. Pity for her that we don’t just take these insults. That there are many members of the pro-choice and informed consent community who will fight the stigma and lies thrown around by the pharmaceutical lobby.  We see their influence in politics and media every day and we know what we are dealing with. We will fight for our freedom of choice and the medical freedom that we deserve in Australia.

It all started earlier in the year when Jill stated on television that there is no risk in vaccinating your children.(See video below) An absolutely ridiculous statement from a health minister. Knowing that no medical procedure has ever been 100% safe. To blatantly come out and tell people there is no risk is a massive slap in the face of people that live with vaccine injury every day of their lives. Jill made this even worse by ignoring requests from her constituents to talk to her about this statement. She has been refusing to speak to or even acknowledge parents of vaccine injured children in her area.

Video: Jill Hennessy stating that the science is very clear. There is no risk in vaccinating your children.

Jill’s response to all the families in the pro-choice and informed consent community happened in the end. Her response was to engage the national media in a frantic story of her being attacked by the “vile anti-vaxxers”. She was all over the news, paper and any TV shows that was willing to give her airtime. The media jumped to this possibility to shun the bad light on the informed consent community. The media turned this into a massive national story that was being talked about in depth on every media outlet in the country.

Jill mentioned that we in the informed consent community are organised, but I think she underestimated us. Because when some dedicated people started looking into the “tweets” it was uncovered that some were made up and others were taken from closed and secret Facebook pages and groups. It was proven that these “tweets” were handed to her by known internet bully and online stalker Reasonable Hank (aka Peter Tierney or Tiernan – one day we will find out for sure and you can read more about the Wank here and here). Jill used information that was illegally taken from these groups. Used it as if they were comments that were sent to her directly and fabricated the whole story this way. She fabricated this whole story to incite hate against families who just want a choice.

The story on “Tweetgate” was published (link) and follow up stories were written about her disgusting and hate inciting behaviour when she publicly supported the stalker of parents of autistic children, Philip Gluyas and his “nasty” work, the AV Checklist. (link and link). The pro-choice community started a petition to get Jill fired (link) and a media release was sent out (link). Nothing came of this. The mainstream media showed its ugly face when none of the mainstream outlets anywhere in Australia wanted to run a story about a minister inciting hate. About a minister fabricating a story and lying on national television.

Jill must have been a bit annoyed when the next story broke not long after all this(link). Jill’s health department had yet again made an outrageous claim in regards to vaccines. As seen in the picture it stated 100.000 vaccines can be managed by a child’s immune system. Even to the biggest pro-vaccine advocates out there this statement would have raised some eyebrows. But instead of having the debate it was straight into attack mode. The trolls aligned with the Australian Skeptics, Friends of Science in Medicine and Reasonable Hank all came out in force to point out that the flyer had research behind it. Research which was unscientific and based on math and written by 3 of the largest pharmaceutical and vaccine advocates the world has ever seen. And let’s not forget that the research was actually misquoted as well. But you can read more about that in the article.

It was disturbing to see so many of the trolls, many of them claiming to be scientists, doctors and even professors, claiming that the research was sound. That the flyer was right. It took a few people in the informed consent community less than an hour to pick this flyer apart. It really shows the capabilities of the science and medical community in Australia on lacking independent and critical thinking skills. This was only amplified when less than a week after the flyer was discovered it was quietly removed fro the health website. Obviously, the health department wasn’t too sure about the claims that were made on the flyer. Another story showing the secret, quiet cover up of this potentially dangerous information was written and published. (link)

It seems that Minister Hennessy is immune from any wrong doing. You would think that spreading ridiculous statements, inciting hate, inventing lies, liking and working together with internet bullies and stalkers, spreading dangerous and potentially deadly health information and then quietly removing it without any retraction whatsoever would be something that the media would like to run with. You would think that this kind of behaviour from a public figure would get some attention at least. But all it has shown is that our system is completely owned and controlled by the pharmaceutical companies. They own our political system and media. And through this, they have the ability to influence our perception. They can control what the masses hear and see and thus control what they think.

We need to have our community step up and show people the blatant corruption that is going on at the highest levels of government. A great way to do this is to take this amended flyer with you to your Christmas functions. (Download it here) Ask your pro-vaccine and fence sitting family members and friends to have a good look at the statement made and ask them to think about the implications of this. What does this mean for any other statements made by our government? What does it mean when they quietly remove this information without telling people what they stated in the past might have been wrong? What does it mean for the average Joe when the government is incapable of admitting mistakes?

Jill Hennessy is responsible for the information published by the health department. Jill Hennessy is responsible for her relationship with Reasonable Hank and her Twitter affair with Philip Gluyas. She has shown she is unwilling to listen to her constituents and refuses to support a civil debate in any way. I would hope that the Australian political system can show that it has some backbone. That it is not as completely corrupted as it seemed during 2016.

I ask Premier Daniel Andrews to have a good look at the Victorian health department and take the executive decisions that should have been made a long time ago. That we can all expect from the Premier of the State.

Let’s all wait and see what 2017 will hold for Jill Hennessy, the health system and the corruption in the corporate and political arena in Australia. It is time that the media takes responsibility and shows the corruption that has taken control of our country. If they are incapable of doing so it will be time for a true and powerful alternative media to fill the void and inform the people. As long as they control the information we are doomed. 2017 will bring the much-needed changes and we will fight on. That’s my resolution for 2017!